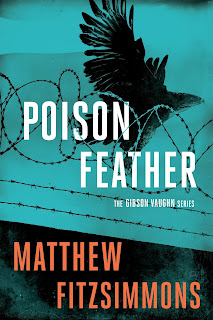 Born in Illinois and grew up in London, he now lives in Washington, DC, where he taught English literature and theater at a private high school for more than a decade. Poisonfeather is his second novel.
Posted by Kevin R. Tipple at 12:30 AM

I've always enjoyed the way writers like John Gardner could deconstruct a classic like BEOWULF and create a work like GRENDEL, the story told from the monster's point of view rather than the hero. Grendel became the protagonist. A creative spin. We all learn from reading such work.

I think it's important to give those walk-on characters attention enough to make them equally as 'real' as the major characters. I also think all writers can learn a lot from theater.

I've had minor parts in horror movies. One of the parts was that of a securty guard. I remember thinking that this guy has a job, perhaps a wife, a mortgage...a life beyond the few seconds he's given on screen. I'm not much of an actor, but I did have an epiphany of sorts. My minor characters in my writing also have lives beyond the few seconds I give them in my story or novel. I began listening to them, and I truly believe my stories have become stronger for that. Your post was a reinforcement of that. Thank you.