J. D. Smith, known to one and all as “The Lawyer” is still in pursuit of Big Jim Kimbrough after recent events in Six Guns At Sundown. Delayed for a bit by that, he is back on the hunt and feels he is finally very close to his quarry. The trail has led him to this isolated spot as a fire ravages the nearby hills. Things are not as isolated as they should be as the trail is a bit busy. First, the local undertaker passes with two bodies in tow. Whether those deaths are the work of Big Jim, he has no way of knowing, but The Lawyer is sure he does not want to help dig the necessary graves no matter what the undertaker offers to pay. 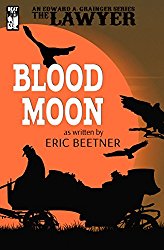 Then there is the man who says his name is Lewis and asks for some water from his canteen. Water is given and Lewis eventually goes on his way.

Ambushed minutes later the bullets should have killed him. To add insult to injury, he is soon bit by a rattlesnake that was disturbed by his hard fall to the ground off his horse, Redemption. Being bit by a rattlesnake certainly will not help matters. Shot, snake bit, and left for dead by the ambushers, The Lawyer is lucky to have survived long enough for any of the locals to try to help him. He may not live much longer between what happened to him, the rampaging wildfire, and the fact that Kimbrough and his current gang are most assuredly in the area.

The Lawyer: Blood Moon is the latest in The Lawyer series begun by David Cranmer. Building on what started in Six Guns At Sundown author Eric Beetner has crafted another fine western tale full of rich detail. While this is a series that should be read in order, one could read this installment without sacrificing too much if new to the series.

Material supplied by the publisher last month in exchange for my objective review.