Having survived Red Venus a few months ago, Captain Nadezhda Gura of the spaceship Krasnyy Sokol and crew are dispatched to Mars on a rescue mission. Thanks to the Russians recovering the prototype V-5 fission powered engine in the last days of World War II, they gained a significant advantage in the space race. The people living in the American colony, Chrystetown, are in serious trouble. The Krasnyy Sokol is the closest rescue ship at a mere eight million kilometers distance. 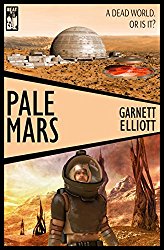 As the only colony on Mars, there is no one else on the planet to assist. An American spaceship, Fist of Freedom, is on the way from Callisto, but it will take more than three weeks to get to Mars. As Admiral Onegin points out, any gesture of goodwill by Russia to help Americans could help ease tensions a little bit with their superpower adversary. That is the public position. Something else is at work behind the scenes and only the good Captain knows what was said to her privately by the Admiral.

What the plan is and what is happening at the colony are just two of several major points of this highly entertaining story. Part adventure, part science fiction tale, and with pieces of a mystery and a western added in to the mix, Pale Mars is another highly atmospheric tale by talented author Garnett Elliott. More than anything, as he did so well with Red Venus, once again there is that certain pulp fiction space adventure style technique that makes this one another very good and very fun read.

It is still really cool.

Material was supplied by the publisher to read and review.