Jeanne is back today…. 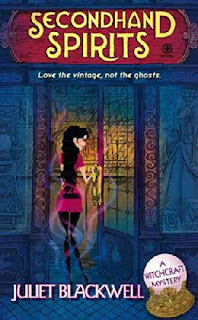 When Lily Ivory opens a secondhand clothing store in San Francisco, she’s hoping for a fresh start.  Lily grew up in Texas under the watchful eyes of her grandmother after Lily’s mother couldn’t deal with a daughter who had considerable supernatural powers. Lily’s father, himself a powerful witch, was pretty much out of the picture for reasons not quite revealed.  Suffice it to say he seems an untrustworthy sort, if not evil.  That last is still to be determined.

In the opening book, Lily’s efforts to keep a low profile runs into problems when a murder forces her to use her power, which in turn draws the attention of Aidan Rhodes, a handsome and extremely powerful witch who more or less runs the supernatural portion of the city. She also has to deal with a skeptical reporter and a gargoyle/goblin.

This is a charming series (pun somewhat intended) which makes for great treadmill reading and beyond.  Blackwell takes her stories seriously; some sections are quite intense.  There is humor to leaven the tension, often in the form of Lily’s pig who is also her familiar.  And not really a pig.

While the first books appear to be following tried and true formulas, later books show Blackwell forging her own path.  In short, her story arcs are less predictable than some series. While the main story is wrapped up in each book, there are a few plot threads that are ongoing; this leaves readers satisfied but at the same time intrigued to see how Lily’s overall story will play out.

As with most of my favorite books, characterization is the strongest aspect.  Lily is not only a novice witch, but a newcomer to a lot of human interactions.  Shunned as a child, she never experienced close relationships with anyone but her grandmother: no girlish friendships or steady boyfriends.  She’s not unwilling to forge relationships, just uncertain. The supporting characters are also well developed, and like Lily herself, change and grow over the course of the series.  Some prove disappointing; others turn out to be true allies; and some remain ambiguous figures.

There are numerous other things to enjoy about the series.  One aspect is the vintage clothing and accessories, which is odd in a way because my idea of fashion is to have earrings that match my blouse.  The reason I do enjoy it is that Blackwell drops in bits of historical information about the pieces, the material, and even the social conditions that created the fashion.  For example, she notes that most vintage fashion isn’t off the rack suitable for modern wearers because body shapes have changed in the past few decades.

Blackwell’s witchcraft blends a number of traditions, but Lily is primarily a brewer of potions, especially in the earlier books.  She describes a few techniques, including how to harvest certain plants.  Another aspect I enjoy is that Lily is, in many ways, still a student. There is much she doesn’t understand yet, and even some things she has believed to be true that are not—or might not be true.  This goes back to characters, many of whom have their own agendas.

In short, this is a series that keeps me walking past my original goal which makes it Treadmill Gold.

Juliet Blackwell is the author of another series, Haunted Home Renovation Mystery, and has written two standalone non-mystery novels.

Witchcraft Mystery
1. Secondhand Spirits
2. A Cast-Off Coven
3. Hexes and Hemlines
4. In a Witch's Wardrobe
5. Tarnished and Torn
6. A Vision in Velvet
7. Spellcasting In Silk
8. A Toxic Trousseau