Jeanne of the Bookblog of the Bristol Library is back today for this first Wednesday in July. Be cool and read the review. Like many cozy series, this one features cats. Nobody ever does turtles. Makes me want to start plotting The Terrible Turtle Murders or Pepperoni Murder With A Twist of Turtle. John Turtle would be the signature character. Much like the family namesake, John Turtle plods along and eventually tracks down the killers in his small hamlet. It is a thought…

Dixie Hemingway—no relation to you know who—is a former police officer who turned to pet sitting after a family tragedy.  Raised in Siesta Key, Florida by her grandparents, she still lives in their old house along with her firefighter brother Michael and his partner, Paco. She doesn’t look for dead bodies, but a considerable number seem to come her way even so. 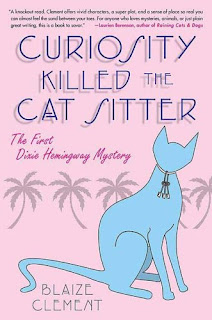 Dixie is an engaging character, an open, honest woman still trying to deal with her losses.  She tries to keep a certain amount of emotional distance but she’s still a friend you’d want to have beside you in a crisis. She’ll offer help to a stranger, go the extra mile to be sure an animal isn’t mistreated, and is as fiercely protective of her brother and Pedro as they are of her. A few of the books touch on social issues but never in a preachy way.

Good use is made of the Siesta Key setting.  I’ve never been there, but now I do have a yen to visit.  I may well end up as one of those tourists Dixie tries to avoid as she criss-crosses the island taking care of her charges.

The plots are well done and there is a bit of pet care wisdom dispensed along with clues.  Over the course of the series, a stable of supporting characters appeared such as Deputy Jesse Morgan, Detective Guidry, and lawyer Ethan.

After Blaize’s death in 2011, her son John took over writing the series.  He and his mother had enjoyed long discussions about the books and he knew where she wanted to go with the series.  He also had a good understanding of the characters.  While parts of the books seemed a bit tentative at first, and had some by the numbers scenes (visit to the diner, check; have a slice of chocolate bread with Cora, check; run with Billy the greyhound, check), the latest book seems to be on firm footing.

For those who don’t like books with animal deaths, there is one to avoid in the series.  Otherwise, the books are very animal friendly.

I’ve probably done fifty miles with this series.  While Dixie sometimes rushes in, she does have some law enforcement and emergency training, so I find that easier to forgive than in some series.  Her love life is tentative; there’s an attraction but she’s cautious, still hurting from her last relationship’s end but trying to get on with her life.

In short, another good solid series, reliably interesting, with characters I like.

I like your turtle idea! I think there actually was a turtle in one of the Cat Sitter mysteries, back in the first few. My rationale for reading the ones with cats are that if I don't like the plot or the characters, then maybe I'll like the cat. I hate not finishing books and sometimes I need all the help I can get....

The running joke around here is I move like a turtle. I hunt and peck at the keyboard like a T-Rex. Apparently, my spirit animals are extinct or very slow. So much for being one with the wolf or eagle. :)

THE TURTLE HANGS AT NOON