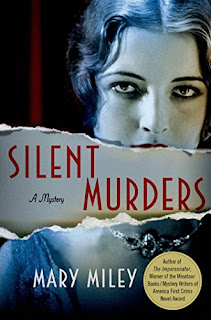 Silent Murders by Mary Miley (Minotaur, 2014) is the second book in the Jazz Age historical mysteries. After recovering from events described in the tumultuous series debut that introduced Leah Randall, a vaudeville actress who aged out of the child parts she’d been playing, Leah has taken the names of her cousin and her father and moved to Hollywood. Now known as Jessie Beckett, friends from vaudeville helped her find a job as a script girl in the new United Artists film studio founded by Douglas Fairbanks, Mary Pickford, Charlie Chaplin, and D.W. Griffith. Jessie is beside herself with delight when Bruno Heilmann, a famous director, invites her to one of his enormous parties. She is even happier when she discovers one of the caterers at the party is a former vaudevillian who often shared a stage with Jessie’s late mother. She makes an appointment to meet the caterer to talk over old times as she leaves the party.

Jessie learns early the next day that Heilmann has been found dead, clearly murdered, setting Hollywood in a tailspin. When Jessie arrives at the home of the caterer that afternoon for tea, she is devastated to find her dead, another murder victim. Within a few days, two more of the party-goers are poisoned. Jessie uses her acting skills, her access to costumes and make-up, and her ability to move around the film world unnoticed to investigate the crimes and protect her new Hollywood family.

Miley based this book on the unsolved 1922 murder of Hollywood director William Desmond Taylor. About this time a series of scandals made Hollywood synonymous in the mind of the public with depravity and immorality, and Miley mentions these scandals as this story unfolds. This is a well-written, soundly researched narrative that can be read as a stand-alone.

I particularly like the entertainment history that is woven into the background and the implications that changing technology had for the people who made their livelihoods from show business. In the first book, Jessie is out of work because the venues for vaudeville are drying up as the silent movie becomes the preferred form of mass entertainment. In this book the changes that sound would bring to the film industry are discussed in a brief aside. Many of the silent film stars were from other countries and had strong accents or little ability to speak English. They did not survive the transition to the talkies. The stars that could adapt continued their careers, for instance, consider Jack Benny, who started his career on the vaudeville circuit and transitioned into radio, film, and television. Not everyone was as versatile. Parallels to the effects of technological changes in the past 30 years are all too easy to draw.