The Western Star is the latest in the Sheriff Longmire Mystery Series by Craig Johnson. It is a book of two primary storylines--- one of the past decades ago and one of the here and now. A complicated book full of nuance and meaning, it isn’t one easy to review without revealing key details that would impact the enjoyment of the book. 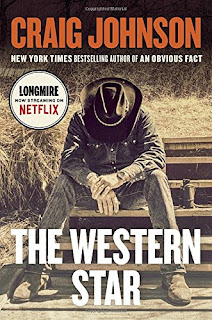 In the here and now, Sheriff Walt Longmire is back at the Wyoming Law Enforcement Academy recertifying his weapon status. The academy is also on the way to Cheyenne where he goes every four years to attend a parole hearing. It his duty and a promise he made many years ago to do everything possible to keep a certain inmate locked up.

His deputy, Victoria Moretti, is also recertifying and headed to the hearing with him. Former Absaroka County Sheriff Lucian Connelly is along for the ride. After recertifying they three eventually wind up in a bar hanging out with other law enforcement folks and trading stories. At one point, the topic of The Western Star comes up. A steam-powered locomotive that led a sheriff train each year from 1948 to 1972 and served as a rolling meeting of the Wyoming Sheriff’s Association. Back in 1972, Sheriff Lucian Connelly brought Deputy Walt Longmire, just home from Vietnam, with him. There is a picture of the twenty-four sheriffs and one deputy, Walt Longmire, standing next to the old locomotive and that picture brings up for Walt Longmire some intense memories. That picture and those memories serve as the basis for a powerful flashback secondary storyline that dominates much of the book.

The storylines eventually merge in The Western Star and this thirteenth novel in the series becomes a powerful read. Partly due to the past and partly due to dire warnings of the evils in the present day. The latest in the series is very good. Fans of the television show tempted to read this book need to understand that the books are far different from the television show and must be read in order.

The Western Star is highly recommended and well worth your time.
For another and slightly more detailed take on the book, make sure you head over to Lesa Holstine’s review. Lesa' review was recently saluted by The Rap Sheet in a Revue of Reviewers segment.