Sandi is doing so-so today. She was sleeping when we got there and probably went to sleep right after we left. She was in a lot of pain and had numerous back spasms while we were there at the hospital. She is still receiving heavy amounts of fluids and antibiotics and will receive a lot of blood later today.

Dr. Mathews was the one on the floor today. He is a doctor we very much like and has known Sandi for the last several years. He is the doctor who, among other things, diagnosed her horrendous leg swelling problem from a couple of years ago. Normally he is very positive and chipper and full of enthusiasm no matter how dark things to be.

Today he was very somber when he came in and talked to her. He spent a considerable amount of time visiting with us and discussed a few things. While the CT was inconclusive it did rule out TIAs or any brain bleeds as well as any obvious tumors. There were some other things it revealed that may be cancerous or it might be scar tissue caused by the chemos as is happening around and inside her heart, in her lungs, and elsewhere. He agrees that the best we can do right now is to try and get some pain control and get her blood work in terms of her diabetes, the unspecified infection, and other issues stabilized. He agrees with the overall assessment of the situation by Dr. Bushan who is her main doctor. That means he didn’t see anything to do differently and this is a man who is unafraid to say so if he sees something. The fact that he was going with what Dr. Bushan had said was not encouraging at all. 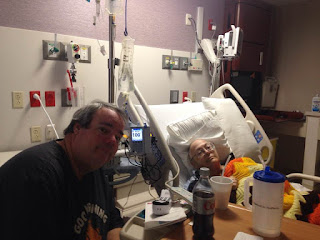 So, after he left I knew I absolutely had to go with what I had planned to do and tell her everything. I did that and it was one of the hardest things I have ever had to do in my life. I explained everything in detail and what I knew. I also explained why I had not told her all of it until now.

She was not as lucid today as she has been the last couple of days, but she got what I was telling her and understood it all. Some of it she was already aware of, but most of it was new information. We discussed what she wants to do going forward and she wanted everyone to know she is not about to give up. Period.

While her cell phone remains broken and T-MOBILE will not stand behind their insurance plan, she does now have her iPad with her at the hospital. She is having some trouble working it at times. Still, I think she will be on Facebook from time to time the next few days so we may hear from her.

In the meantime, things will continue. Radiation will start up Monday with treatment 13 of the planned 25. It is unclear whether she will get any physical therapy this weekend, but she will definitely get some blood today. She probably will get some tomorrow as well.

She told me to make sure folks knew that she was not giving up no matter what and to thank
everyone for their thoughts, prayers, and support. Thank you.
Posted by Kevin R. Tipple at 4:09 PM

Thanks for letting us know, Kevin. Sandi is one tough woman, and it took guts for you to break that news.

Hugs to Kevin & Sandi, wishing there was something I could do.

Thank you both.Been a brutal and very emotional day. And I really feel that I have failed her.

No, Kevin, I'm absolutely sure you haven't failed her. Get some sleep.

If there's anyone who hasn't failed his wife, it's you, Kevin.