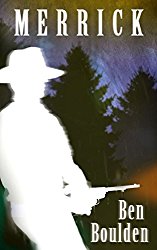 Almost from the beginning, the planned robbery of the armored stage goes wrong one day in Texas. Nobody was supposed to die. Clarence Tilley, had a good plan, but he didn’t plan for everything in Merrick: A Short Story.

A robbery gang is only as good as its weakest link. The point is proven again and again in this fast moving western tale by Ben Boulden. Filled with plenty of action, intrigue and deceit, as well as need for justice, the story recounts how Merrick  does what needs to be done to settle things as best as can be done in the hard scrabble West. Like his novel, Blaze: Red Rock Rampage, the short story, Merrick, is highly recommended.

Digital ARC was provided by the author for my use in an objective review.