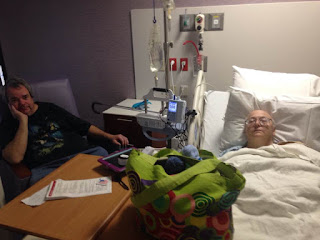 Sandi had her 13th of the planned 25 radiation treatments this morning and that doctor told her everything remained on track from his perspective. Fluids in their various forms, including antibiotics, continue, as do her occasional fevers indicating the unspecified infection remains very much present. Mentally today, she was very out of it and having a hard time staying awake.

Whether that is caused by the cancer doing its thing—as it has in the past—the meds including the new pain pill which she believes she has only had one of those, or something else going on we don’t know. At least today, she did not seem to be in as much pain as she has been in recent days or weeks.
Posted by Kevin R. Tipple at 3:15 PM

Less pain is good news. Sometimes we have to concentrate on that kind of thing.

Yes, we do and yes, it is. I am worried about the mental side of things with her. She seems to be easing backwards on that and it worries me.

THoughts and prayers. At least you aren't burdened by keeping things from her now, small consolation though that is. She responded with the strength of will we've come to expect from Wonder Woman.

Well, I am not burdened when she can remember what I told her. That is fluctuating wildly.