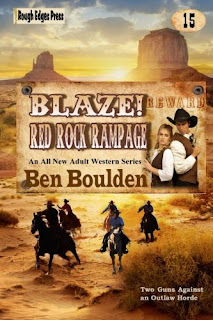 It is a moonlit night in the badlands of Southern Utah as the western tale, Blaze! Red Rock Rampage begins. With his wife, Kate, asleep beside him, J. D. struggles to stay vigilant. His struggle is soon rewarded by the noise of a boot heel sliding across rock. Two stalkers become visible in the moonlit night and their planned ambush quickly turns against them.

With one dead and J. D. in pursuit of the second man, it is obvious that if they had not taken the offered job they would not be in this position now. The man from the railroad made it clear he was willing to pay to stop the robberies and did not care if the thieves lived to serve time in jail. Therefore, Kate and J. D. had waited weeks for the next robbery and when it finally happened, they started tracking the gang across northern Arizona and into Utah. In the harsh and unforgiving country, they had thought they were closing in on the thieves undetected, but clearly not.

When J. D. does not return, Kate goes looking for him and finds him unconscious and injured. His Colt handgun is also missing. When he awakes, J. D. is very unhappy and most definitely wants his gun back. After a brief discussion and thanks to a couple of clues, they decide the one who got away is headed to the nearby town of Small Basin. 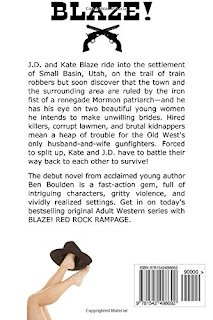 Small Basin is a small and very poor town where the Mormon faith is practiced by nearly everyone and where folks prefer to be left alone. Those that live there were not friendly years ago when J. D. came through on the trail of another fugitive. Nothing has changed now, as most are still not at all friendly towards strangers. That is especially true of the sheriff who is in possession of J. D.’s gun. While they are not welcome in town and have been ordered by the Sheriff to leave, they need to get the gun back, find their suspected thief, and do a couple of other things too. Kate and J.D. have much work to do, but there will be times for play.

Blaze! Red Rock Rampage  is a very good western. 15th in the series originally created by Stephen Mertz, the read features plenty of action and adventure in a western setting with some mystery and romantic elements thrown into the high octane mix. Well plotted and complicated, the read moves forward at a rapid pace. Blaze! Red Rock Rampage is highly recommended.

Thanks, Kevin. I'm glad you enjoyed the book.