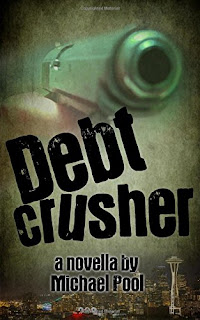 Cam Reynolds has a simple job. Collect the money owed to his boss, Tommy, Jr. He is the son of the legendary and now deceased mob boss, Tom Colcetti. The kid may not value him as much as his father did, but the kid is keeping the family business going and Cam still has a job. Though it is not the job he wants as he feels that he should have moved up by now. Junior has also made some changes that Cam does not approve of and it looks like he won’t be moving upwards anytime soon. At forty two years old he should be doing better than still having to go after guys to collect debts.

It is the job Cam has and he is very good at it. Cam has a reputation for violently collecting monies owed hence his nickname of “Crusher.” He has such a reputation that he rarely has to get physical these days which are a good thing as the years are beginning to take a toll. The latest dead beat who owes is a guy by the name of Gomez.  The man owes 10K and tried to run after getting a wakeup call from Cam who happened to be sitting outside the guy’s place when he made the call. After trying to run and being caught, some trunk therapy followed by quiet contemplation of his circumstances should assist Gomez with his motivation to pay up. 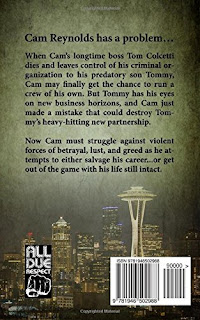 Unfortunately, things go wrong and years of loyal service mean nothing. Gomez was connected and Cam got the order to lay off after he had already started trunk therapy. Crusher screwed up and now he is a dead man on the run. At least he thinks he has a sexually willing travel companion in the mysterious woman he met in a Seattle area bar who is willing to help him get out of town in exchange for a fee.

Author Michael Pool quickly pulls the reader into a classic noir style set up where the antihero is on the run because things finally went wrong. One little thing starts the collapsing domino chain and things escalate rapidly in the wrong direction. Unlike his short story collection that I reviewed back in January, New Alleys For Nothing Men: Crime and Noir Stories, where some characters are a bit more introspective, Debt Crusher is pretty much a straightforward violent crime fiction novella. In some of those stories, the violence is chained up and it takes time to be released. In this novella, the violence is a major character and barely under control from the first page. Debt Crusher quickly becomes one violent confrontation after another as Cam does what it takes to not only honor his nickname, but to stay alive. If you prefer animals in your stories, a read clean of graphic language, and the violence to be off the page, this is most definitely not the read for you.

Copy provide by the author for my use to read and review.