Please welcome back Bronzeville Books Submission Editor Sandra Ruttan back to the blog today. Her interview subject this time is author R. G. Belsky whose new novel is BELOW THE FOLD… 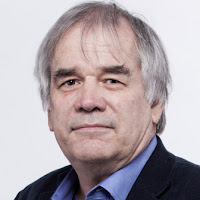 Fun Fact:
R.G. Belsky says, "I was part of the newsroom team at the New York Post that created the most famous tabloid headline of all time: HEADLESS BODY IN TOPLESS BAR. I spent many years working on a lot of big stories as a journalist, but if you google me you’ll find that’s what I’m most famous for. Go figure!"
SR: What’s your new book/work in progress about?
RGB: BELOW THE FOLD is about the seemingly meaningless murder of a homeless woman on the streets of New York City (“below the fold” is a journalist term for a story not worthy of big play) - until TV newswoman Clare Carlson links the woman’s death to long buried secrets involving powerful public and political figures.

SR: Was there a specific issue or incident that really motivated you to write this particular story? What was the prompt?
RGB: Murder is not treated equally in the media, only the most sensational murders make it to the front page or onto the TV news headlines. I know that from personal experience in newsrooms over my career. So I decided to write a mystery novel about what might happen if a totally insignificant murder suddenly turned into a huge news story. That’s what happens in BELOW THE FOLD.

SR:  What conspiracy theory is your protagonist most likely to believe in? Roswell? JFK? Princess Diana? What about you? Any conspiracy theories that you think might have some truth to them?
RGB: Oh, definitely JFK for me. I don’t believe a word of the Warren Commission Report. In fact, I wrote a whole mystery novel a few years ago called The Kennedy Connection on this very topic. As for my protagonist, she believes whatever conspiracy theory I believe. Hey, I’m the one that writes her, right?

SR: Is there something you hope the reader carries away with them after they’re done reading? An insight or philosophy that you wanted to come through in your work?
RGB: Integrity. That may sound corny, but integrity is the most important thing my TV newswoman character Clare Carlson brings in my books. Journalistic integrity is very important to me, and Clare has built her life and career on that. She makes a lot of bad decisions and breaks a lot of rules along the way, but she’s basically a good honest person.
SR: What’s the first book you remember reading that had a huge impact on you? How did that story affect you? How do you think it shaped your desire to be a writer?
RGB: The Big Sleep by Raymond Chandler. I picked it up by chance as a young man out of college, was fascinated by Chandler’s writing and the Philip Marlowe character. I read all the rest of Chandler’s books, then Agatha Christie, then Robert B. Parker’s Spenser....and on and on. I knew then that I wanted to try to write mystery novels myself.

SR:  What’s the best thing about writing?
RGB: Me, I’m one of those who actually loves the writing process. Sitting down every morning in front of a blank piece of paper (or a blank screen) and just seeing what comes out. It’s fun and rewarding to see how creative I can be on any given day.

SR:  What’s the worst thing about writing?
RGB: Editing. Especially the line editing at the end of the process. Making sure every fact/every spelling is right. That’s not so much fun. I spent much of my life as a journalist where my job is checking and working with facts all day. One of the great things about being a mystery novelist is I get to make facts up. Most of the time anyway, until that damn final edit....

SR: What detail in your writing do you obsess over the most? Character names? Locations? Description? Dialogue? Research?
RGB: All of them! Seriously though, getting the characters and their dialogue right is the most important thing. To me, that’s what makes a book come alive. I’ll read a book with terrific characters and dialogue and not much of a story before I’ll read a meticulously plotted one without them.

SR: Are you drawn to things that are really popular or wary of them? Do you find it helps you to market your work if you’re familiar with what’s currently selling or do you ignore all of that and focus on what you’re interested in?
RGB: It’s easy to say I’m not interested in what’s selling in the market, but most of us are. Look, I may not write a book just like Gone Girl or The Girl on the Train - but I certainly am aware of their popularity. And I suppose that can play a role in some of the writing decisions I make about my own book. In the end though, an author has to write what is important to them, not anyone else. And just hope the market agrees!

SR:  If you have to live in a potential natural disaster zone, would you pick blizzards, hurricanes, tornadoes, earthquakes or volcanic eruptions? Why? If you had to describe your protagonist as a weather system, what would they be?
RGB: Hurricanes. I’ve survived a few of them (one on a remote island) so I know what they’re all about. Of course, I know about blizzards too but I hate them. My biggest fear would be an earthquake (they sound really scary) and I really tend to stay away from areas where there are volcanic eruptions.

SR: What movie or TV world do you wish you could live in? Why?
RGB: Seinfeld’s apartment. You get to make jokes for a living and cool people like Kramer, Elaine and George keep coming into your apartment.

SR: You strike it rich. What charity are you going to create or support?
RGB: Any charity (probably several of them) that benefits animals.

SR: What factors influence you when you’re choosing a book to read?
RGB: First page. And the voice of the author on that first page. I can usually pick up a book on a store shelf, read that opening page and know whether or not its a book I want to read.

SR: Do you have any special events coming up? Where can people catch up with you in person or on a podcast?
RGB: I will be making a number of appearances over the next several months to promote BELOW THE FOLD, including a book launch party at Mysterious Bookshop in New York City on May 9. I also will be at all the major mystery conferences - Bouchercon, ThrillerFest, Killer Nashville, Deadly Ink and Malice Domestic. See the events section on my website at www.rgbelsky.com for more details about where I’ll be.

R.G.  Belsky is an award-winning mystery author and journalist. His new novel is BELOW THE FOLD, the second in a series about TV newswoman Clare Carlson. He is also the author of 11 other mystery novels. As a journalist, he has worked as a top editor at the New York Post, New York Daily News, Star magazine and NBC News.

Sandra Ruttan is the submissions editor for Bronzeville Books and an author.
http://www.bronzevillebooks.com/