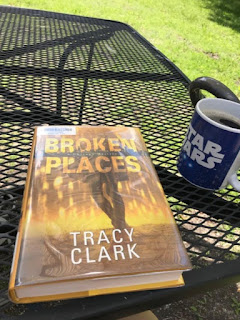 Former Chicago PD officer Cass Rains barely survived a shooting two years ago. These days she runs a one person detective agency and does a few other things including playing chess with Father Ray Heaton. Father Ray is family as he is a father figure and more to her.

She knew something was up with him and he finally told her some of it. She thought she had it covered. She was wrong as Father Ray is soon dead in his church along with a young man who may or may not have been in a local gang. The lead detective on the case has quickly decided that it was a murder/ suicide and won’t listen to her or consider anything she says. Farraday is the self-serving idiot that nearly got her killed two years ago.

The idea that he is handling the case and still has a job, let alone a promotion, is bad enough. The fact that he is mishandling a case so important to her is unacceptable. If he won’t work with her, she will go around him. If that does not work, she will go through him. The case is going to get solved even if it kills her as she owes Father Ray.

Oh, and biological Daddy is back in town and wants to reconnect as if life isn’t hell enough as it is.

First in a series, Broken Places: A Chicago Mystery, is an engrossing and complicated read. It has plenty of action, characters of depth and breath, and a very complicated mystery. Built from stereotypical elements which then are morphed into a read that is truly different, this is a hard boiled mystery. Cass is more than a bit sarcastic in dialogue and inner monologue as she does not tolerate fools lightly. Some readers may not appreciate that fact or understand that the read is not a police procedural as some reviews mistakenly state. This is a hard boiled mystery.

Much is going on here in the main storyline as well as the second one and most of it is far too complicated to go into in a review. Simply put, Broken Places: A Chicago Mystery by Tracy Clark is a very good read well worth your time. If I did the best book of the year list, like so many other folks do, this would be right up there in my top five. Considering it has now been nominated for an Anthony Award, I guess those folks agree with me.

The second book in the series, Borrowed Time, was released on May 28, 2019. Art Taylor hosted author Tracy Clark recently on his blog, The First Two Pages, where she spends some time talking about this book.

This is another book I have read only because of a review by Lesa Holstine. You can read that review here. Go read her review. Then read the book.

I'm so glad you liked Broken Places, Kevin! It was one of my favorite books of 2018, and Library Journal picked it as one of the top mysteries of the year as well.

You get all the credit for leading me to it and I thank you.