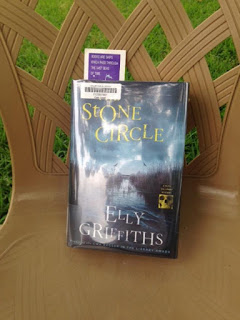 The letters have started coming again. Why they are coming is just one of several questions that DCI Harry Nelson and his team have as The Stone Circle begins. While Nelson is sure that the new ones have to be somebody pulling a copycat deal because the original letter writer is very much dead, the team isn’t so sure. He isn’t the only one getting disturbing letters. Ruth gets a letter that bothers her too.

It has been twenty years and that letter writer and what he did still has a grip on Ruth, Nelson and everyone on that case. That past still has a grip on everyone and does so in many different ways in February 2016 as this book begins. One was is the aforementioned letters. Another is the fact that the stones that legend says are sent by Jack Valentine have begun appearing again. Then there is the current archeology did, a news murder, a new child abduction that brings up strong emotions for everyone, and numerous other problems and situations.

The Stone Circle is the eleventh book in the Ruth Galloway Mystery Series and is another very good read. Ancient stone circles have always played a prominent role in this series and clearly they do here with The Stone Circle. As one would expect, all the major and secondary characters are back and life continues to move forward for Ruth Galloway, DCI Nelson, and members of the team who are haunted by cases and various events in prior books. It is all very complicated and requires readers to read the series in order as frequent references to life changing and serious past events come up again and again.

The Stone Circle: A Ruth Galloway Mystery by Elly Griffiths is another good one in a series that began long ago with The Crossing Places. Occasional humor, some history (though it should be noted there is little archeology in this one), and plenty of mystery and suspense (personally and professionally), make this another good read.