Aubrey Hamilton Reviews: The Colours of Murder by Ali Carter 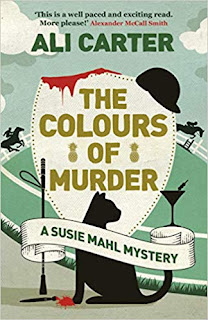 The Colours of Murder by Ali Carter (Oneworld Publications, June 2019) is the follow-up appearance of Susie Mahl, after her introduction in A Brush with Death (2018). Susie is an artist whose work appears in the Tate Art Gallery and who also accepts commissions for pet portraits. She is in Norfolk for a couple of weeks, doing the ground work for six drawings of racehorses. Her mother has told a cousin with connections in the area that Susie is visiting, and the cousin’s connections get her a last-minute invitation to join the weekend house party of the Honourable Archibald Cooke Wellingham. Susie knows no one in this group of upper-crust folks but she accepts the invitation anyway.

After a long evening of drinking a burglar alarm wakens the household in the early hours of the next day, and that’s when the other outsider in the party, American Hailey Dune, is discovered dead. The police decide the death is due to natural causes but Susie’s intuition tells her otherwise. She continues to ask questions and report her findings to the detective inspector in charge, who displays great patience with her. A would-be boyfriend is not as tolerant.

P.G. Wodehouse echoes faintly throughout this book. I am not sure if it’s the almost too silly to be real names, the flippant prose, the over-the-top mannerisms of the gentry, or a combination thereof, but after a few pages I would not have been surprised to see Bertie Wooster walk in.

This story is more of a cozy mystery than I usually read these days, and I found the lack of adherence to standard police procedure hard to work through. The in-depth look at country house parties and horse racing was interesting, and of course there were dogs, horses, and a nice cat to attract my attention.

Reviews suggest the previous book is a stronger story than this one. Both are recommended for cozy readers who are looking for a new series that is a bit different.