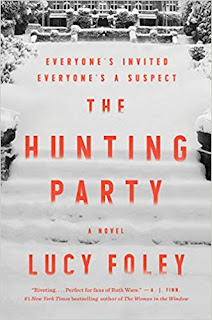 The Hunting Party by Lucy Foley (Morrow, 2019) is an updated form of the classic country house mystery at Christmas. Every year a group of friends who bonded while they attended Oxford spend New Year’s Eve together. This outing, the tenth holiday they’ve spent together, was planned by Emma, the most recent addition to the group via her relationship with Mark. Emma found a beautiful lodge in an isolated part of Scotland, so remote there is no wireless signal. The group takes a train north, and some cracks in the long-running friendships become visible during the trip. Miranda and Julien, the golden couple, are plainly having problems; Katie, the only singleton left, is distracted; Giles and Samira brought their new baby and are engrossed in her, not their friends.
The setting is exquisite: mountains, waterfalls, forests, wildlife. It sounds like a lovely vacation place in the summer, not so much in the winter. In addition, the possibility of a serial killer in the neighborhood pops up every two or three chapters, adding a level of anxiety to the country noises the city dwellers aren’t used to. In the time-honored fashion of country house mysteries, two days after the group arrives, a record-setting snowfall cuts them off from the rest of the world, and one of their group disappears after a long night of drinking.
The lodge handyman discovers the body. The site manager agrees the injuries visible means the death can’t be accidental and calls the police to report what is obviously a homicide. The weather prevents the police from rushing to the lodge as well as keeping anyone from leaving it, heightening the worry of the group.
The story is told from the perspective of the lodge manager, the handyman, and four of the group of friends. It is a little curious that we don’t find out what the others are thinking. In addition to the frequent changes in point of view, the timeline moves from the beginning of the trip to the discovery of the body and back again, often in chapters of only two or three pages. It is a highly effective way to build suspense but I found it disorienting. The first part of the book is mostly predictable, adding to the intensity of the surprises in the last chapters.