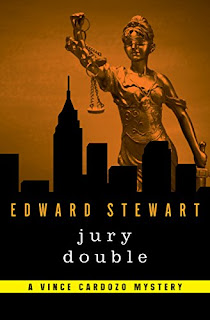 The fourth book in the Vincent Cardozo series, Jury Double, originally published by Headline Books in 1996, is an interesting mixture of a legal thriller and a police procedural. The complicated plot centers around Corey Lyle, a cult leader similar to Charles Manson and Jim Jones, who is believed to convince his followers to commit murder and other crimes while staying far removed himself. The New York City prosecutor thinks they have established a case against Lyle in the deaths of an elderly wealthy couple who left their considerable estate to Lyle. Called to jury duty is Kyra Talbot, who is enmeshed in a custody battle with her ex-husband. Her mother left a significant trust to her only grandchild, Kyra’s son, and whoever has the son has control of the money. Both Kyra and her ex-husband outspend their earnings, so the outcome of the upcoming custody hearing is crucial to them both.

Kyra doesn’t want to miss the custody hearing so she pressures her twin sister Anne Bingham to take her place on the jury, just for a day, she says, but it turns out for the duration of the trial. Because of the extreme publicity, the judge decides to sequester the jury: no contact at all with the outside world. Even though the hotel telephones are supposed to be blocked to external calls, Anne gets an outside call in her room telling her that her nephew has been kidnapped and if she wants to see him again, she must secure an acquittal for Corey Lyle. There are no phone records showing that the call took place and the judge thinks she’s trying to get out of jury duty. The judge is looking for a promotion so she has no intention of calling a mistrial.

In the meantime, a former supporter of Lyle’s turns state’s evidence in return for immunity for his own misdeeds, which is sending the police around the bend, as the supporter is far too interested in children for anyone to reasonably overlook it. One of Cardozo’s detectives disappears after following him and is later found murdered.

Multiple interwoven plot lines, all of which are resolved, perhaps not completely realistically, by the end of the book. Fast-moving, good escapist reading.

This review was based on the Kindle version of the book released a few years ago.