Sandra Ruttan Reviews: Beneath the Ashes by Dea Poirier 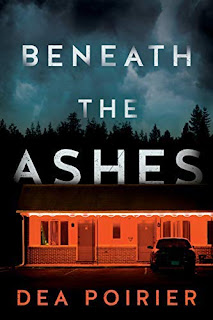 In her sophomore offering, Dea Poirier sends Claire Calderwell on her next big case. A girl's body has been found in a motel. There are ritualistic elements at the scene that hint at a murderer who has been killing girls for a long time, and when more bodies are discovered.

Meanwhile, Claire's boyfriend Noah is busy dealing with his own ghosts miles away. Claire misses him, but is struggling with whether or not to take their relationship to the next level. Meanwhile, she's assigned to partner with a young female officer who's never worked this type of case before, and finds herself in the role of teacher and mentor.

In her investigation, all roads seem to lead to the same hospital. The female administrator is heartless and there are plenty of reasons for suspicion, but the hospital is uncooperative and has enough influence to make it hard for Claire's investigation to advance.

There are plenty of discoveries along the way as Claire, and the reader, sort out what information is relevant and what isn't. One of the strengths of Poirier's approach is that she doesn't rush to quick fixes and simple solutions. Claire feels very real because she is damaged and solving her sister's murder doesn't automatically make everything better. She'll spend a lifetime working through the damage from that trauma, and no relationship, drink or life choice is going to change that. Claire wrestles with demons. She struggles with what she wants - Noah - and her fears about loss.

Poirier's stories are as much about the slow road of recovery from trauma and dealing with grief as they are about the murders Claire investigates. It's one of the hallmarks that sets her series apart, and readers leave Beneath the Ashes with the sense that whatever crimes Claire deals with next, she will continue to work through her personal issues as well as she heals, making her a relatable and compelling character to revisit with each new series installment.