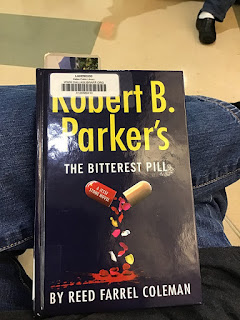 If you have been paying any attention at all you know about the Opioid crisis and the fact that the war on drugs has been a colossal and expensive failure. Author Reed Farrel Coleman uses that common knowledge as the background for The Bitterest Pill: A Jessie Stone Novel.
The opioid crisis has made it to the coastal region of Paradise, Massachusetts. When the legal drugs run out, those desperate have to turn to heroin to get their fix. That can have tragic and disastrous consequences. Local student and cheerleader Heather Mackey has been found dead in the bedroom of her home thanks to a heroin overdose. Clearly, she had to have gotten the drugs from somewhere and the most obvious place would by way of somebody, at her school, Paradise High School.

The end user is just the tip of the iceberg. Somewhere and hidden in the shadows are the folks pulling strings and make money off of addiction and death. While Paradise Police Chief Jesse Stone and his team work to uncover the bosses, the bosses and others work to obstruct and kill off all venues of investigation by any means necessary.

The latest book in this series is another good if depressing read. Plenty of facts about the drug problem in this country are interwoven into the fictional storylines as work in The Bitterest Pill: A Jesse Stone Novel. For those of us who have battled our own addictions to pain killers and alcohol while dealing with chronic pain and more, much of this read will ring very true. As one would expect from this author, the book is another solidly good read well worth your time.

I really liked Robert B. Parker's writing. Does Reed Farrel Coleman's work have the same feel as Parker's?

I think so. I think he is also evolving the characters, especially Jesse, and I see that as a good thing.