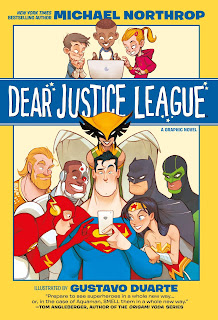 Dear Justice League by Michael Northrop with illustrator Gustavo Duarte is a graphic novel for middle school aged readers. This is a book built around the concept of members of the Justice League answer their fan mail and address topics important to such readers. The book features superheroes such as the Flash, Superman, Wonder Woman, Batman, and others, answering questions about making mistakes, dealing with bullies, self-esteem, and more. The heroes answer these questions and more while dealing with dealing with their own lives and an alien invasion. It is a light hearted, humorous, book aimed at younger readers that teaches a few things while also containing great art and plenty of jokes.

While Amazon has the book listed as intended for readers in the second and third grade, the use of language as well as the jacket copy of the book makes it clear the read is intended for the older crowd in middle school. Obviously, it could be read by younger readers who are ready to read this sort of material and there is plenty of content that appeals to adult readers as well.

If you think Superman getting a ticket for texting while flying is funny or Aquaman being worried about smelling like fish, Dear Justice League by Michael Northrop with illustrator Gustavo Duarte is the book for you as well as any younger reader in your life. This fun read has also generated a planned sequel titled, Dear Super-Villains. Following the idea of answering fan mail, this book will address the fan mail of villains and is scheduled to be out sometime in the fall of 2020.

Material supplied by the Kleberg-Rylie Branch of the Dallas Public Library System.