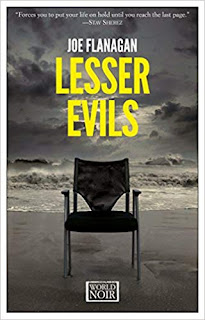 Lesser Evils by Joe Flanagan (Europa Editions, 2016) is an astonishing piece of noir fiction. Bill Warren, its protagonist, is surrounded by corruption in his small Cape Cod town of 1957, yet he remains convinced of the need to be an honest, fair, and upright human being. Bill is the acting police chief in Barnstable while the police chief is on medical leave. He is the sole support of a disabled son since his alcoholic wife wandered away years ago; he’s trying hard to care for young Mike while doing his best on the job. His rectitude backfires on him sometimes, as when he discovered the antique store owned by a gay couple is being robbed but no one on his force responds to the reports. He investigates himself and finds the thief to be the son of one of the selectmen, who threatens him with his job if he doesn’t close the case. While he damages his standing with the very people who can give him the chief of police position permanently, he is able to return the latest stolen items to the store owners, much to their surprise and gratitude.

Someone is killing young boys on Bill’s turf. His team turns out in full force only to have a publicity-hungry State Police captain sweep the case out from under them. Another family disappears after they reported violent treatment by a local group of gamblers in an attempt to collect money. An investigation of the bar that fronts the gambling den links the group to organized crime in Boston. Bill organizes a raid on the place, only to find it cleaned out and the pigeons flown – someone within his own team is feeding them information.

There are some great characters here. The local politicians are deliciously seedy. The pedophiles pulled in for interviews are skin-crawlingly creepy. A doctor trolling for patients to try his new drug on betrayed every ethic of his job. A prominent subplot involves Father Boyle, a sad priest who believes he’s lost his faith and his calling but he continues to carry out his duties at the local hospital and the school for disabled children run by a group of nuns. Father Boyle has a confused past; his grasp on reality doesn’t seem to be firmly in place. He’s deeply committed to the children in the school, where they are delighted to see him on his visits. I held my breath waiting for him to be accused of the murders. Like Bill Warren, he would have been unable to defend himself. Instead the subplot resolves unexpectedly in possibly the most unusual way I can remember in crime fiction.

This book is deeply dark and violent, showing humanity at its absolute worst at moments. I nearly stopped reading midway. The writing and the story became so compelling I was driven to learn how it all ended and a wonderful ending full of optimism it is. Publishers Weekly starred review.

A fine review of what appears to be an excellent read. Thanks for sharing.