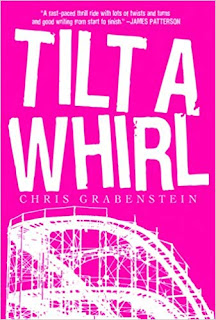 Chris Grabenstein is a wildly talented guy. After attending the University of Tennessee, he moved to New York City where he performed with improvisational comedy ensembles for several years. His next career move was to write advertising copy for James Patterson. After that he began publishing fiction in earnest. He’s published more than 40 children’s books. He has won many awards, including the 2006 Anthony Award for Best First Novel for his debut mystery featuring Iraqi war veteran John Ceepak. It’s been seven years since the latest and quite possibly last title in this eight-book series was published, and it may be time for those who overlooked it to give these books another look.

In Tilt-a-Whirl (Carroll & Graf, 2005) we meet former MP John Ceepak, just back from a horrific tour of duty in the Middle East. He joins the Sea Haven police force for the summer to give himself a break. Sea Haven, New Jersey, is on a barrier island swarming with tourists and vacationers during the summer. What ordinarily is a small quiet town is overrun by sun-seeking humanity then. Ceepak is an Eagle Scout and committed to upright behavior. He will not lie, cheat or steal, nor tolerate anyone who does. He makes a profound impression upon Danny Boyle, the 24-year-old naïve narrator of the book, who joins the police force to augment the staff needed to handle the summer crowds.

Ceepak and Boyle are leaving a breakfast diner early one morning when a 12-year-old girl covered with blood comes running down the street. She tells them her father has been killed in the nearby amusement park. Ceepak rushes to the scene, while Boyle takes the girl to an unopened store to question her and get her out of the potential view of the shooter. Ceepak discovers the body of the local land development czar, whose business tactics left something to be desired. His enemies were legion, so the cast of suspects is substantial. Instead of taking a break from violence, Ceepak’s police experience make him a natural lead investigator of the homicide that is followed by a kidnapping.

Fresh characters, original setting, complex plot. Recommended to mystery readers who overlooked this series earlier or who are looking for something new to read. Booklist starred review.