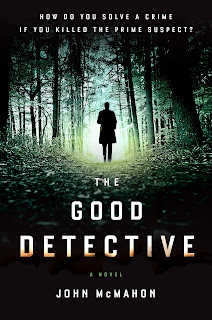 Set in Mason Falls, Georgia, The Good Detective by John McMahon is a complicated novel of family history, legacy, southern tradition, and in one major way, redemption. In this intense police procedural, deals are made with the devils you know to get not just what you want, but what you need.

Detective P. I. Marsh desperately needs to have his wife and son back with him. Thanks to a recent tragic accident late one night, that will never happen again on this mortal plane. Now he needs booze to push down the pain and to stop from thinking about his loss and the fact he continues to live without them.

That heavy drinking means he does not often remember what he did the previous evening. As the book jacket telegraphs to everyone---“How Do You Solve A Crime If You Killed The Prime Suspect?”--- this is precisely Detective Marsh’s problem. He does not know if he killed the abusive boyfriend of the stripper known to all by her stage name of “Crimson.” He was there, the guy is very much dead, and he can’t remember what happened after he showed up and sent her on her way before explaining reality to the abusive boyfriend. It is possible, but he does not think he is so far gone that he actually did it. He just does not know and has no one he can confide in and no evidence one way or the other.

His case is bad as a young African American male was found burned to death in a farmer’s field. That was bad, but the fact that, at some point, a noose was around his neck makes things so much worse. Beyond that link, there are other links to southern history in this small part of Georgia. It soon becomes clear that these killings happen in pairs and another child is missing.

A fast paced and intense police procedural, The Good Detective takes several classic tropes and throws them into a blender before tossing in a bunch of other stuff. What comes out is an intense read that has hints of Shakespeare and Greek tragedies, more than a dash of dark humor, and a trace of redemption that is not one hundred percent pure, among other elements. Race and history play major roles in the read as does grief and trying to go on after you have lost everything that truly mattered.

The Good Detective by John McMahon is a very good read and strongly recommended. Next in the series, The Evil Men Do, is scheduled to be released March 3, 2020.


For more on the book, head over to Lesa Holstine’s blog where she has an interview with the author. You can read that interview here. This is one of those deals where the fictional character interviews the author. A short interview that also does not spoil the book unlike many such interviews out there on the internet and in print.

My reading copy came by way of the Forest Green Branch of the Dallas Public Library System. I am also on the holds list for the next book.