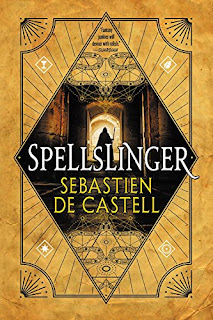 Spellslinger by Sebastien De Castell is the first in a series by the author of the Greatcoats series. Kellen, a young man, is trying to make his way in the world where magic is more important than character. Kellen is good person, but not a very powerful mage. In fact, his magic is slowly fading away.  if he does not pass his mage trials he will be forced to become a servant of others whose magic has only grown. He is searching for a way to pass his trials while also trying to and save his magic. His only hope seems to be a mysterious woman named Ferius Parfax who wields strange magic that no one else in his town can do.

While the above is the basic premise of the book, the read is far more complicated. The amount of character development Kellen goes through is tremendous. If you are familiar with the author you already know that he loves to write complicated tales with lots of twists and turns while making the characters suffer emotionally and physically. He prefers to write complicated worlds, smart heroes, and intelligent, yet utterly morally bankrupt, villains. He writes villains that have their reasons for doing evil and those reasons may or may not be justified. His tales always start out pretty straightforward, but by the end, the characters have tremendously changed.

Spellslinger by Sebastien De Castell reflects the author’s usual mode of operation as Kellen at the beginning is far different by the end of the book, though his core of who he fundamentally is remains the same. He relies on being smart as others have strength and others have magic skills that far exceed his abilities. In this word, he may be the weakest mage so he has to out think others. Luckily for him he is smart and makes friends with Ferius who is funny and a great character in his own way. It will be interesting to see how their friendship grows in the next book, Shadow Black.


My reading copy came from the Downtown Branch of the Dallas Public Library System.