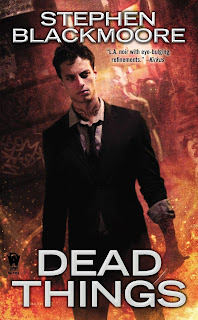 Dead Things by Stephen Blackmoore is the first book in the Eric Carter series. This series is an urban noir fantasy series with a dash of humor and elements of horror. Our anti-hero is Eric Carter who is a necromancer. His life is about fighting things that most people would run screaming from. Fifteen years ago, after killing an evil mage, he was forced to leave Los Angeles. He stayed away until now as his baby sister, Lucy, has been murdered.

Eric Carter is back in Los Angeles to find out who or what killed his sister and get vengeance. He had a lot of enemies back in Los Angeles and has made many more in the years since. There a lot of people and things that could have killed her to get back at him. Thus begins the tangled story.

I enjoyed this violent, curse word filled, mature story. This book is not for the squeamish at all. This is very much an adults only book. I appreciate the nuance of the characters in the story, especially Eric Carter. The magic system and the world the author set up is familiar to urban fantasy lovers, but with some interesting differences as a result of the character being a necromancer.  Dead Things by Stephen Blackmoore has one very interesting ending that creates anticipation for the rest of the series.