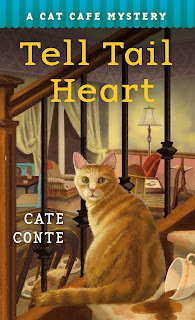 Maddie James’ life seems to be well on track.  Her cat café, JJ’s House of Purrs (named for her beloved cat JJ) is doing well, as is her love life.  She’s been building up a steady clientele, folks who enjoy a treat while communing with adoptable kittens and cats.  Recently, a man has been coming in with his laptop who seems more intent on working than interacting—which is fine, of course, but just a little unusual. After all, he’s paying $15 an hour when he could be going somewhere else (his local library, to use a totally random example) for free. As it turns out, he probably has a reason for avoiding libraries full of alert readers: the man is Jason Holt, a best-selling author of thrillers whose books have been turned into blockbuster movies.   Rumor has it that he’s trying something new, a non-fiction book about an unsolved case.  Maddie’s mother, an aspiring writer, is an avid fan and anxious to meet Holt and get tips.

But while Maddie can already envision the marketing campaign she can spin out of Holt’s patronage, she has something even more important on her mind: the strange woman who showed up and announced that JJ was her cat, and she wants him back.

As if that isn’t enough to worry about, a body turns up in a canal and Maddie finds herself in the middle of murder investigation.

This is the third in the Cat Café Mystery series.  The characters and setting are in place, though readers who pick up this one first shouldn’t have any problem keeping up.  I felt the plot was more complex than in the first two books, which I like; one of the supporting characters played a more prominent role and readers learned about his past.  This is a light, enjoyable series with an adorable cat, and offers enough entertainment to keep me walking (and don’t underestimate the importance of that!)

Sounds interesting. I'm writing a sweet romance series based around a cat café. I guess they're really becoming a cultural phenomenon!