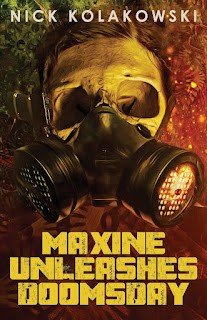 When the world seems to be on fire every day and the new normal of society is borderline chaos, Nick Kolakowski’s new book, Maxine Unleashes Doomsday has a lot of relevance to the here and now. He builds on that and extrapolates into a near future that is all too plausible. Part crime fiction, part dystopian thriller, and with violence on nearly every page, this is a complicated read that is very good.

A little over one hundred years now, climate change has wreaked havoc through sea level rise and more. Major cities such as New York are flooded and ravaged. Foods are in short supply and local government as we know it now is gone. The United States has fractured with various areas controlled by local mob style bosses as the federal government tries to hang onto their last grasp of power. That fracturing of everything trickles down all the way to the boroughs of Manhattan and Brooklyn who are locked in a battle for control.

They are not the only ones locked in territorial battles as there are groups everywhere fighting over the dwindling amount of resources in a world that is getting worse and worse. On a very personal level, there is the personal battle of survival of Maxine Hardwater. Unfortunately, beyond the fact of her age and gender being perceived by some as ways to control and marginalize her, she also has to battle her drug addicted mother to try and keep family and home together. She also has to battle her Uncle, a notorious criminal known as “Preacher,” who is really good at barely rescuing her from a current problem and then promising real and meaningful help in the times to come.

Maxine learns again and again that the word of family means often less than the word of strangers. With very few options in a world going downhill as society crumbles more and more, she is left to fend for herself by use of her brains, brawn, and fatalistic courage. As such, there is a noir style flavor to the read that has a steady drum beat of the original Mad Max and Terminator movies style vibe to it. 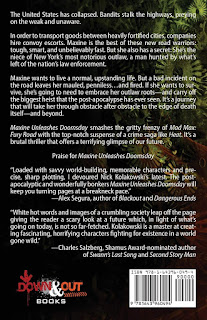 Along with occasional flashes of dark humor--- of course the New York Giants have evolved beyond football to a full scale criminal enterprise--- and social commentary, Nick Kolakowski fractures time and a linear storytelling style throughout the book. He does so by creating a complex story based on an artificial intelligence compilation of various source materials. A historical record of sorts is compiled covering segments of the life of Maxine Hardwater. That record comes from many sources and includes academics that sometimes argue with the artificial intelligence about the record.

Despite that storytelling angle, the read never becomes preachy as it delves into many topics such as poverty, climate change, politics, technology with its good and bad side, and many others. In fact, one has to pay close attention because things come and go in a read that, likes the world that it depicts, is fractured in many different ways.

While dystopian fiction has not been a staple of my reading tastes since 9/11 when everything changed in so many ways, this one is quite a bit different than the usual fare I have seen over the many years I have been a reader. Maxine Unleashes Doomsday by Nick Kolakowski is a mighty good read. It also presents a world that could very easily happen and one I really do not want to see.

For another take on the book, check out Sandra Ruttan’s guest review from last November here.


eBook ARC provided by the author with no expectation of a review.