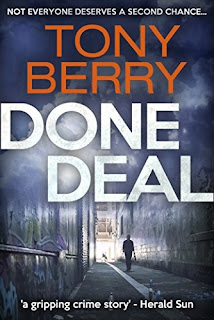 For 48 hours in April, Lume Books, a small independent publisher in London, made 50 of their most popular digital books free to anyone in any amount. I shamelessly took advantage of this lavish offer and downloaded more than 15 titles. (I am too embarrassed by my greed to count the exact number.) In very slight recompense I am recognizing their prodigious generosity here. One of the books offered is by Tony Berry, a journalist from the UK who lived in Australia for years, where he wrote his first Bromo Perkins book, Done Deal. Published in 2008, it won a New South Wales Genre Fiction Award, as did the second book in the series. The subsequent books about Perkins were equally successful. After a residency at the Centre for Excellence in Banff, Canada, Berry returned to Cornwall where he is working on his family history and writing the next book.

Bromo Perkins is a former British intelligence operative who left the bureau by mutual agreement after a flubbed assignment and migrated to Australia, where he opened a travel agency. He lives quietly, enjoying the culture and ambience of his adopted country. He’s trying to wake up at his usual Melbourne coffee shop one morning when he’s approached by an unknown woman, who shows him photographs of his recent weekend with a married lover. Bromo has no idea how the photos were obtained but Aurelia’s husband has a reputation for violence. When this stranger tells him to go to a home and dispose of the mess in it or expect to learn the photographs have turned up in the hands of a jealous husband, he chooses what seems to be the less risky of the alternatives.

Arriving at the apartment in question, he finds a body, that of a well-known property developer, who has been brutalized and left for dead. Not at all what he was expecting, but he calls a friend and they drive a car with the body into the closest river. From there, the action kicks in and does not stop. The property developer seems to have been in the midst of a battle between local residents in favor of indiscriminate development and residents who wanted everything where it was 25 years ago. Two of the property developers have fallen out over the plans for Melbourne’s future. They are not above using underhanded methods, including kidnapping and murder, to get their way.

Well-written, fast-moving, original plot, everything I could look for in a thriller. The Australian slang did throw me here and there, but that’s what Google is for.