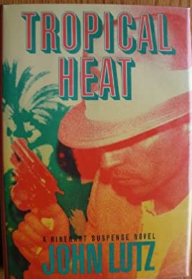 John Lutz has been a byword in the world of crime fiction for years. He is the author of more than forty novels and over 200 short stories and articles. He is a past president of both Mystery Writers of America and Private Eye Writers of America. Among his awards are the MWA Edgar, the PWA Shamus, the PWA Life Achievement Award, and the Short Mystery Fiction Society's Golden Derringer Lifetime Achievement Award. He is the author of two private eye series, the Nudger series, set in St. Louis, Missouri, and the Carver series, set in Florida, as well as stand-alone books.

In the first of a 10-book series, Tropical Heat (Henry Holt, 1986), Fred Carver is introduced as a former policeman injured on the job and forced to take early retirement. He acquired a private investigator’s license and hung out his shingle in Del Moray, Florida, where he is still recovering from his wounds. His former lieutenant sends Edwina Talbot, a hotshot realtor who is searching for her lover, to him. All the evidence suggests that Willis Davis committed suicide by leaping from a cliff into the ocean. Edwina does not believe that he would leave her and, since his body has not been recovered, prefers to think he disappeared because of money problems.

Carver is reluctant to take the case – if the police think it’s suicide, it probably is -- but he needs the money and he needs to be busy. He learns that the Davis was skimming cash from client deposits at the realtor firm where he was working. Then he finds forged ID in multiple names in his apartment. Suspicions justifiably aroused, Carver doubles down on talking to Davis’s coworkers and associates, which attracts the attention of some knife-toting, drug-dealing Cubanos who expend considerable effort to discourage Carver’s research. Federal law enforcement representatives who happen to be watching the Cubanos aren’t happy to have Carver in their way. Violence begins to trail Carver wherever he goes, and Carver finds he’s in better shape to deal with it than he thought.

Well written and plotted even if the outcome is predictable. A solid start to a fine series.

I really enjoyed the Fred Carver books and was disappointed when Lutz stopped writing them, despite the fact that everything Lutz has written afterward has been wonderful.

I have never read them. Amazon had the first three novels in an eBook so I bought that after I set things up as my local library does not carry them even when it is open.