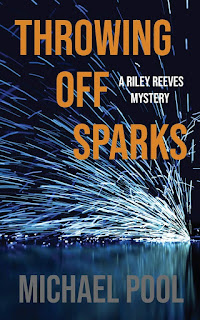 Throwing Off Sparks: A Riley Reeves Mystery by Michael Pool is the first book in what promises to be a highly entertaining series. There are numerous references to an earlier case which was the focus of the story, “Weathering The Storm,” in The Eyes of Texas: Private Eyes From The Panhandle To The Piney Woods anthology edited by Michael Bracken that came out last year.  While it is not necessary to have read that short story before reading this novel, it would not hurt as those events still have personal repercussions in this novel set more than a year later.

Most of Riley Reeves cases are missing persons and surveillance cases. Divorced and stubborn, she could have easily slid into police work following her legendary father. She is not good with rules so doing private investigator work is her thing as she goes about her life while her brother sits in prison. She works out of a small office building on the square of downtown Tyler that she inherited from her dad and lives in the family home after mom passed. There are wrinkles to both situations that add depth to character and setup conflicts best read instead of being detailed here.

She needs a case as the bills are mounting. The man and woman who walk into her office that morning clearly have money. The wife also clearly has attitude, so she is going to be problematic. They have a problem and seem to want her help. At least the man does, but the wife is another thing.

Paul and Lee Anne Wallace have a 17-year-old daughter, Carmen. Somebody started playing small pranks on her and things seem to have escalated to full on stalking behavior. Somebody is putting nasty notes on her car as well as occasionally vandalizing it. The same person is also apparently coming by in the middle of the night and tapping on her bedroom window. Other little things have been happening as well in recent weeks. Mom, Leanne, is sure it is a neighbor boy who has a bit of a reputation. Dad, Paul, is not so sure he is the one doing it. While they do not agree as to who is doing it, the parents are in agreement that they want and need it stopped. 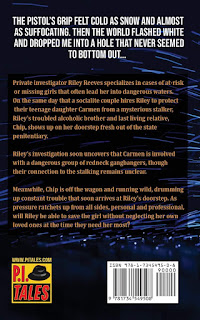 There is no evidence that the neighbor kid is the one doing it. In fact, there really is not much evidence of anything so the Sheriff’s department can’t really help. For any parent such a situation would be of concern, but their daughter has major life-threatening medical issues so that makes things worse.

While Riley Reese is not sure she can really do anything that has not been tried already, she agrees to come look around the property and talk to their daughter. Once she does that, if she thinks she can help, they can all decide on a plan of action and other details.

Before long, Reese has her hands full with their case and a host of other problems. Things get very complicated very fast in this fast pace mystery. Throwing Off Sparks: A Riley Reeves Mystery by Michael Pool is clearly a foundational book for the series. That means there is a lot of backstory to the various primary characters, especially Riley, so as to set up for the reader how she perceives her world and the people in it. That backstory provides nuance and depth to the characters and does not slow down the read at all because it is weaved in so well. If the coming series follows the precedent here, the series should be really good.

I received an eBook ARC of this read awhile back from the author with no expectation of a review.