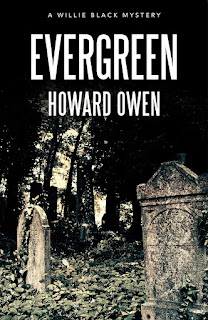 It is New Year’s Day in 2018 as Evergreen: A Willie Black Mystery by Howard Owen begins in a way that is very familiar to many of us of a certain age. Between his bladder and the cat sitting on his chest, sleeping much past eight in the morning is proving impossible. While hosting a party at your own place solves the transportation issue, there is one heck of a mess to clean up on the morning after. Cleaning up and thinking about having to go work at the paper later gets pushed aside when Richard Slade calls.

Richard Slade and Willie Black have a complicated history familiar to readers of the series. In the here and now, his mother, Philomena Slade, is in the hospital and is not doing so well. According to Richard Slade, she wants to tell him something important about Artie Lee.

Artie Lee was Willie Lee Black’s father and he died a little over a year after Willie was born.  Peggy never talks about him and Wille knows next to nothing except that he was African American. Back in 1960, African Americans and Caucasians could not legally marry. The simple act of dating was frowned upon by a significant portion of society. That belief that the races should not mingle extended to the child of such a union. That reality has been a major part of Willie Black’s entire life.

As it turns out, Philomena Slade has been quietly maintaining Artie’s grave in a local cemetery that has been nearly forgotten in the mists of time. All she wants is for Willie to maintain the grave site after she passes. A simple request that is far more complicated than it first appears. Now that he has been told of the grave site, something he has never known until now, all Willie wants is to learn all he can about his father and what happened that fateful night decades ago. That night and his death changed everything for everyone.

Willie Black digs into the past in a quest to find out what happened long ago. His mother, Peggy, refuses to talk about it so he has to talk to others who were around at the time and know what happened. Getting folks to talk is not easy and it soon becomes clear that what he thought he knew all these years was not true. History and race relations have always been a subtext if not a main theme of this series and such is the case here as Willie unearths hard truths that some would much prefer left buried in the past.

Evergreen: A Willie Black Mystery by Howard Owen is the latest published installment of a complex and very good series that began with Oregon Hill. This is not a static series. Characters age, people die by the hand of man or natural causes, and relationships evolve and change, so it is strongly recommended that readers start at the beginning and work their way forward. Additionally, this read contains frequent references to past events and are detailed enough to be considered spoilers.

My review copy came by way of the Bachman Branch of the Dallas Public Library System shortly before the shutdown in mid-March due to the pandemic. Next in the series is Belle Isle which I have here in my print TBR pile after my ongoing reviews of this series came to the attention of the publisher.

The cover of the book caught my attention. Terrific cover. But, just what I need. A new series. It looks really good, though, Kevin. Enticing review.

It is a great series. It really needs to be read in order, Lesa, because nothing is static. A lot of stuff in this book references earlier books in the series. Starting here would be major spoiler city for several other books.