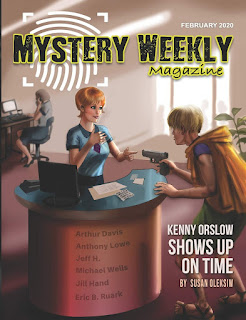 “Kenny Orslow Shows Up On Time” by Susan Oleksiw Is the lead story for Mystery Weekly Magazine: February 2020. It is a Monday morning, the fifth of June, and he is supposed to get on a certain bus outside the County Courthouse and go Lanark. He has a six-month sentence to serve. It is his day and time to report to the bus for transport. At least, that was the plan.

It is the fall of 1899 and a man who goes by the name of George Armadale has arrived in town. A former police detective, he wants ten dollars a day to identify a killer and bring him to justice. It will take a week. Considering the expense as well as the fact that the murder happened just three hours before the former Sacramento detective showed up, it is a good thing he arrived. The local sheriff and his deputies have not solved he case yet in “We Suffered Such A Man As This” by Anthony Lowe.

She clearly was a bit naive though nobody should ever accuse her of being stupid in “The Sizzle” by Jill Hand. Fresh out of high school with limited options her only real option if working for Uncle Everett. He will give her a job in his business. He has a lot of satisfied clients who never complain.

Mr. Deshaw is a legend in the neighborhood. He is a bit stand offish, yet he does care in ways that are not always apparent to others. He travels a lot and based on what he brought back to put in his yard, he does like artwork. That very public display of art and the effect it has on his neighbors is the subject of “Mr. Deshaw’s Sculpture” by Jeff H.

If he had brought the library book over to Mom earlier things might have been different. Marcus mentally plays the “what if” game a lot in “Left Out” by Michael Wells. That and a couple of other things tend to distract him from law school. 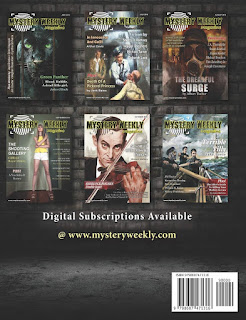 The meeting with the producer who possibly wants to option one of his early crime fiction novels had gone really well. He knew the topic of murder and who to kill had come up during the meeting in the coffee shop. He knew that their conversation about having the power of life and death over folks could have been misconstrued by others who did not realize they were talking about writing and creating central characters. The arrival of the two detective who look like they just came from central casting instead of the police station isn’t surprising. The fact they have questions isn’t a surprise either  in “The Russian Triple Agent” by Arthur Davis.

Each month there is a “You-Solve-It” puzzle where the clues are provided and the reader either solves or does not solve the case. This month the puzzle is titled “Where There’s Smoke” by Eric. B. Ruark. The place is burned down and destroyed as Deputy Sheriff Tracy Leigh Myers picks her way through the rubble. Was it an accident or not?

The issue concludes with the answer to the January case, “Bare Billfold” by Laird Long.