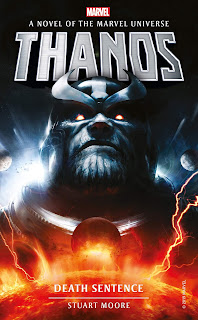 Thanos: Death Sentence by Stuart Moore features the Marvel villain Thanos on a cosmic walk about after his latest defeat at the hands of the Avengers. Since this is the marvel comic version of Thanos -- not the movie version -- he is radically different then what movie fans would expect. Thanos in the comics does everything he does out of being in love with Death. He wants her. Thus, he seeks to kill every living thing in the galaxy to impress and win the love of Death. She has spurned him again after he was defeated by the Avengers. Spurned and having been defeated yet again, Thanos goes on a journey to figure out what he wants and who he is.

The book guest stars the Avengers, the Black Order, the Guardians of the Galaxy, and others as it takes readers across the Marvel Universe. The book is a focus on Thanos and his flaws and why he will never be happy for as long as he chooses to cut a bloody trail across the universe.

This is an original tale that is fairly dark with murder and sexual content. The many murders are very graphic though the sexual content is not. This is not a book for younger readers. Neither is particularly graphic, but this is not a book for younger readers. As one reads this, one must understand than Thanos himself is an unreliable narrator. Called the “Mad Titan” for a reason, he frequently lies to himself as well as many others so there are times in the read where one does not know if what Thanos is saying is true.

If you are Marvel fan this may not be the book for you as the Avengers are not in most of the book. If you are a Thanos fan, or are open to reading from the perspective of the hated villain, Thanos: Death Sentence by Stuart Moore is for you. I enjoyed the read and recommend it with the understanding as outlined in this review.


My reading copy came from the Central, aka Downtown Branch, of the Dallas Public Library System back in the middle of March shorty before the library system closed their doors due to the ongoing pandemic.