Aubrey Hamilton Reviews: A Killing in the Hills by Julia Keller 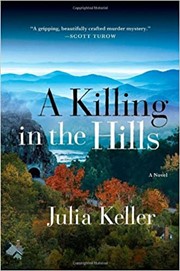 Julia Keller is a Pulitzer Prize-winning journalist turned novelist. She has written eight mysteries about Bell Elkins, county prosecutor in Acker’s Gap, West Virginia, and three science fiction novels in the Dark Intercept series. The book introducing Bell Elkins, A Killing in the Hills, was published by Minotaur in 2012.

No one, least of all Bell Elkins, thought she would return to tiny Acker’s Gap, West Virginia, where the reminders of her painful and impoverished childhood were everywhere. But she found life in Washington, D.C., with her lobbyist husband and their daughter, suffocating. She responded to the inner call pulling her back to her home town, where she parlayed her law degree into the county prosecutor’s job. The never-ending crime and the chronic lack of staff and resources gave her plenty to think about. She is particularly concerned about the growing hold illegally obtained narcotics has taken on the community, and she wants to locate and block the source.

One Saturday morning, though, the intensity of local crime jumped several notches when three men were shot dead as they sat over their coffee in an Acker’s Gap eatery. Bell’s daughter saw it, along with a dozen other town residents taking a break during their weekend errands. All three victims were harmless long-time residents with no known enemies. The witnesses were too shocked to really notice the shooter and their descriptions were so nebulous as not to be useful. The sheriff and his staff tried to find the culprit but everyone knew the surrounding hills and hollows could hide an army. A couple of days later a car tried to force Bell off a dangerously curved mountain road. Bell and the sheriff were at a loss to explain either incident.

Keller was born and raised in West Virginia and her love for her home state shows in her expressive descriptions of the region. She writes beautifully; her use of imagery is poetic. Page flows into page seamlessly in this tightly structured narrative of crime interwoven with sociological commentary. I was halfway through the book without realizing it.