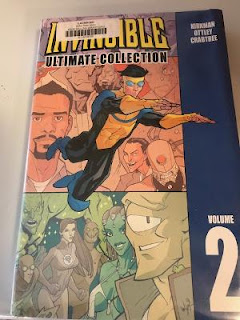 Invincible: The Ultimate Collection, Volume 2 by Robert Kirkman is the second volume in the series collecting 14-24 plus a couple of extra treats. This is the second volume in the series that began with Invincible: The Ultimate Collection, Volume 1.  After the events of the first book, Invincible is trying to collect the pieces of his life as he transitions in this volume from his last year in high school to his first year in college among other major life changes. This means that Invincible had to cope with major changes in his personal life as well as facing various threats such as different super villains and nasty alien invaders. He teams up with various heroes and continues to grow as a person. Several future villains are developed to cause him problems in the future.

His supporting cast has to deal with the changes in their lives as well as the world adjusts to the loss of the various heroes in the first book. The younger heroes have to step up and fill the shoes of legends and take the heavy mantle of protecting our planet. Most of them are not ready for such responsibility, but none of them have an actual choice in the matter. They are not really ready to protect the earth in so many ways as becomes clear, but they are who is left.

This volume is basically a transition tale about adjusting and dealing with change. Growing into your new role and becoming an adult is a theme throughout the book. 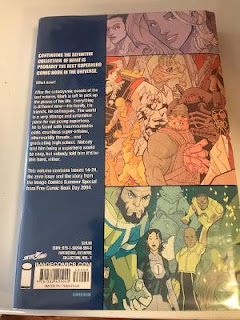 As was the first book, the overall read is violent and action packed at points, but there also a lot of character development since mist of the characters that return in the second book are going through a lot of personal change. This series remains a read that is not for children as addiction and alcoholism is present as well as the fact that several characters suffer gruesome injuries such as disembowelment, eye damage, and other things. Many folks die in this book and those deaths often do not happen off the page.  If you read and enjoyed the first volume, you will probably also enjoy this read.

This volume is a slower paced read that is more focused on character growth and setup for the future, but there is plenty of action at various points. This volume also includes plenty of extras where the writer and illustrators show off parts of their work and other treats that make the read well worth your time.

My reading copy came from the Lochwood of the Dallas Public Library System.