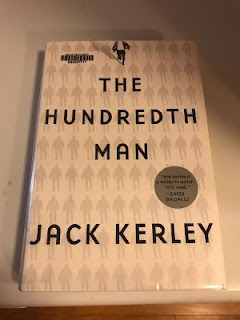 The Hundredth Man by Jack Kerley takes readers to Mobile, Alabama in this police procedural. It is the first read of a multi book series that contains more than a dozen novels. This is a good read that is graphic, at times, and not for those who prefer a traditional cozy style read.

Detective Harry Nautilus and Detective Carson Ryder have a bit of a reputation thanks to the media coverage regarding a recent case. This means that there are many in the department who do not like either one of them. That includes Captain Terrence Squill who is angling to be the next police chief as rumors abound that Chief Hyrum is about to take early retirement.

They and a couple of specialists are part of Chief Hyrum's new project, the “Psychopathological and Sociopathological Investigative Team” referenced by the unfortunate moniker, PSIT. While Homicide Detectives Nautilus and Ryder are assigned to the first district in the city of Mobile, any case that is under the purview of PS11 becomes their case no matter where it occurs. A body missing the head could fit their mandate and would be their first case under the program.

A headless body on the southwest side of the city is their callout this night. Besides missing the head, the dressed male body has been posed a certain way so that he could be found quickly. It is only later when the body is nude at the morgue that it is discovered that there is writing on the body. Two horizontal lines of words that are a message from the killer.

It will not be the last message sent.

While the case is the major storyline, there are a lot of other storylines in the complex read. A book that uses politics, personal relationships, as well as several classic crime fiction tropes (veteran detective partnered with a rookie detective, a grandstanding and massively incompetent boss, hatred of the FBI by locals, etc.) to create the start of a multi book series. Written by a former advertising executive, it seems occasionally as the author did a survey of what worked for other authors and threw those pieces in here.

Of course, how he mixed those pieces together defines his book. The Hundredth Man by Jack Kerley is a solidly good read. Just don't be surprised if now and then you read something and it reminds you of another crime fiction or police procedural. Billed as a psychological thriller, the read is more of a police procedural than anything, though it does contain elements of other genres.

The next book in the series, The Death Collectors, is on hold for me at the library.

My read came from the Downtown Branch of the Dallas Public Library System.