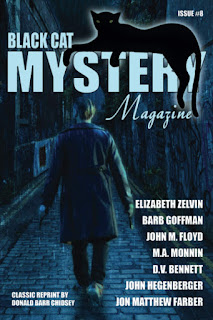 After an editorial from editor Michael Bracken, Black Cat Mystery Magazine: Issue #8 opens with “Trip Up On High Street” by John Hegenberger. It has been over forty years since Elliot Cross lived in a dorm room at Ohio State. Many things have changed in the decades since. A constant is the fac. Killian. t that he would like to go back and do some things over and make different choices than he did that summer in the mid-sixties.

Somebody working in the U.S Consulate in Frankfurt, Germany, is revealing the identities of agents. An out of the box solution is needed, and that means Major Bianchi has reached out to a man he can trust, St. Killian for advice and assistance. In “St. Killian's Choice” by M. A. Monnin, there is one choice to make to start the dominoes falling the right way. The question becomes did he make the correct choice?

Danny and the narrator thought they had a fool plan. They even have an app to make things work even better. All was fine until the narrator lifted more than he bargained for in “You Lose, We Find” by Jon Mathew Farber. Throw in the FBI, The Russian Mob, and some cloak and dagger aspects, and things get very interesting very fast.

Scott Gibson is in a certain cafe at the ungodly six am hour because Tyler Mitchell wanted a meeting. It is a small town and there is a lot of baggage going back years between them so Scott is wary. Of course, there is a woman involved in “The Big Picture” by John M. Floyd. Emily is back in Little Tree, Texas, and things are again personally complicated for all involved. Not that any of that really matters as Tyler Mitchell has a business idea that also hits the hated Grail brothers pretty good.

Author Elizabeth Zelvin takes readers back to the early 1500s in the next tale,  “An Artist In The Harem.” Being born poor and female in Venice is a serious burden, but Sofia has the talent to be one heck of an artist. A male born with her ability would have a relatively easy time of being apprenticed to one of the masters. Being female meant those same masters and their assistants ignored her at best. Things get complicated and soon she is in Istanbul and things might change a bit for the better.

Ex-Army Cop Casey Boyd does odd jobs as well as occasionally finding folks for Ted Garretson. Usually, the folks that Garretson wants found are folks that owe him money. Most pay up. Others need some persuasion and Boyd does that as well. In “Planted Inn Midair” by D.V. Bennett, Garretson wants Sandy Cooper found. The former Olympian is missing. He can't talk to the cops and wants Casey Boyd to handle it as a personal favor. 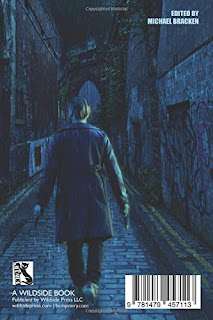 The news that Kenda Silver is dead hits many hard, but especially recently widowed Whitney Woodson. Just a year earlier, her husband Richard had been killed and police suspicion had focused on Whitney. Kenda had figured out who the real killer was and proved her case. Spurred on by that case, she became an amateur sleuth who worked cases to help folks. In Dogwood Valley, the local police in the form of Detective Lance Yinsing do not give Whitney Woodson or her friends much confidence that he can solve Kenda’s surgery. Whitney knows she owes her friend a debt she can never repay and sets out to find her killer for the police in the cozy style mystery, “An Inconvenient Sleuth” by Barb Goffman.

The issue closes with the reprint, “Just Another Bum” by Donald Barr Chidsey. Originally published in Detective Fiction Weekly in early January 1934, it opens with Harry Sauer at the side of State Route No. 17. The day is hot, and the vehicular traffic is nonexistent as Sauer sits at the side of the road about a mile from Ashton City. He is all alone until a stranger, dressed for city life, steps out of the nearby woods. The stranger sees him and wants him gone. He gets increasingly agitated as Harry Sauer refuses and makes it clear that he wants to be left alone in peace. Words are exchanged, things escalate, and then a car shows up and Harry is given a briefcase. The car takes off and the briefcase full of trouble is left behind in Harry's hands in this complicated and very enjoyable classic tale.

All the tales in Black Cat Mystery Magazine: Issue #8 are good ones. They run the gamut in terms of setting, time period, and style, and they all feature folks who quite often find themselves in strange circumstances. Sometimes it happens by deliberate choice that led in unforeseen ways. Other times it is by the luck of birth or being in the wrong place at the wrong time. As always with this publication, there is always a lot of good solid storytelling by the authors selected to appear.

Black Cat Mystery Magazine: Issue #8 is a good one and highly recommended.

I bought the eBook copy of the issue back in January 2021 to read and review.

I have never read a copy of this magazine. Too bad newsstands are gone.

There are still a couple of them here though there is no way I can get to them. My local library system does not do any genre magazine.

I do this in eBook format on the iPad.

These sound good, Kevin, and I love the cover. I purchased a copy and will try these stories.

Thanks for the pointer! The local B&N has been my default newsstand, but since the UK takeover and the slow rollback into regular work, they haven't been too keen on the fiction magazines, and perhaps 1/3rd the titles I would see in early 2020 are still on their shelves...they don't even carry THE PARIS REVIEW at this point, nor MYSTERY SCENE nor LOCUS, all previously staples. Annoying, to say the least.

Hope none of the terrible weather is hanging around your neck of Texas, Kevin...though it seems the worst is heading east.

I do not live anywhere near one since we moved back here.

There is damage across the area as well as on this street, but, we lucked out.