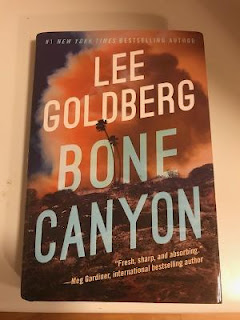 Bone Canyon by Lee Goldberg opens a few weeks after Lost Hills and Los Angeles County Sheriff's Department Homicide Detective Eve Ronin is continuing to be back at work and recovering from injuries sustained during that case. She finally has the cast off her wrist and is grudgingly doing the physical therapy needed to gain strength and mobility in the wrist. She has also been finally released from desk duty. That means she can finally get back on the streets doing her job and she is thrilled with that fact.

It is a hot, muggy morning in the middle of January and her and her partner, Duncan Pavone, are responding to a scene on Hueso Canyon Road in the Santa Monica Mountains. A few weeks earlier, Santa Anna winds created an epic firestorm that roared through the area burning one hundred thousand acres as well as sixteen hundred structures. It also killed.

It also revealed bodies of people who were not killed by the fire. Dumped bodies of the dead that were in the brush before the fire blasted through. Bodies that nobody, other than a killer or killers, knew were there.

Now they have another one. A skull fragment is in the backyard of a home that was spared the worst of the fire. Owned by Sherwood Mintner who states that the backyard has been relandscaped several times over the years and that the piece -- “part of a forehead, the left eye socket, part of the nasal cavity, and the cheek bone (page six)” -- was absolutely not there before the fire. Homicide Detectives Duncan Pavone and Eve Ronin verify the piece is human in appearance and bring in forensics as his yard is now a crime scene.

It is also not the only piece of bone on the seared and scarred hillside.

It is not the only body out there either. 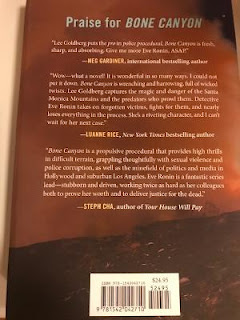 Bone Canyon by Lee Goldberg is a fast moving and intense police procedural that builds very well on the first book. The ongoing theme for Eve Ronin, who some know as “Deathfist,” continues here in its ongoing secondary story line. It continues to directly and indirectly affect her personal life, her professional life in the Sheriff’s Department and is used by others when it suits them and their agenda.

It also works to humanize her in her interactions with others as she works cases and overcomes obstacles of a personal as well as a political nature.  Plenty of action powers this police procedural as it did with the first book. The tendency by the author to over explain the simplest things that readers of police procedural already know continues here as well.

A highly entertaining book, Bone Canyon is a fun and fast read that builds well on Lost Hills. While it could be read by those readers new to the series, there are many spoilers in the book thereby making it strongly preferable to having read the first before reading Bone Canyon.

For another take on the book, be sure to read Lesa Holstine’s review for Library Journal last October. Lesa also sent me her hardback copy to read as she continues to have more books than closet space. Big time thank you, Lesa!