FFB Review: Murder Is An Art: A Mystery by Bill Crider 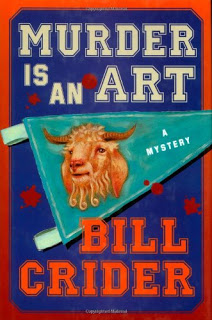 Hughes Community College in Southeast Texas near Houston is a small college doing its best to survive. That means the school and its President Dr. Fieldstone can’t afford and don’t want any scandal. That includes possibly questionable artwork currently being exhibited on campus.

Dr. Sally Good has spent six years as head of the English and Fine Arts Division dealing with budget complaints, political bickering and gossip, and the other stuff that is the bane of academic heads everywhere. This is the first time she has been called in over artwork. Dr. Fieldstone has summoned her along with several other people to his office to deal with a complaint lodged by Roy Talon.

Talon is a local celebrity having made his considerable fortune as an automobile dealer. There is a painting of a goat being exhibited on campus as part of deal showcasing the work of students in the prison outreach program. Bad enough that the goat itself is a symbol of Satanism, according to Talon, but he believes that one can also see “666” painted on the goat head. Upon closer examination of the painting, not only do the staff members not see the sign of the beast, one goes so far to suggest if there is anything it might be “911” making it a sign to call the police.

As a taxpayer and a very important person, Talon wants the painting gone. In any institution, bosses handle difficult issues by forming committees to study the problem and make recommendations. Doing so spreads the responsibility around and absolves the boss from having to upset any one group. Before long, the idea is floated to have a newly created committee review entire exhibit to consider if any of the works are Satanic and thus should be removed.

If you have read very many of author Bill Crider’s books, you will notice that he often starts with something relatively minor that either directly or indirectly leads to a murder. This is especially true in his mysteries based in academia whether it is the Carl Burns series or this one. He also blends in some misdirection with characters that are a bit out there. There is more than one such character at work here and Dr. Good’s observations about them are very funny.

My favorite in this one was Perry “A. B. D.” Johnson who goes ballistic over just about anything on a daily basis. The “A. B. D.”  nickname stands for “All But Dissertation” as he has done the entire graduate coursework and everything else required except for finishing the dissertation. Every campus has at least one. Back in my days at the University of Texas at Dallas there were at least two such people I knew of in the Literature and History Departments. Both were very strange guys. One in fact, who did lose his mind regarding a chair, so when reading the opening pages of Murder Is An Art: A Mystery where A. B. D. Johnson becomes quite agitated over a chair it made this reader laugh out loud.

Laughing out loud is always a frequent danger with any work by Texas author Bill Crider. Published in 1999, the book may annoy some readers who expect the first body to fall by the third paragraph at the very latest. Instead, that will come later as the author introduces us to our fictional companions and sets the table for the mystery meal to come. First in the Dr. Sally Good series, the read is occasionally funny while taking numerous twists and turns to solve a murder or two and quite a lot more. Murder Is An Art: A Mystery is a solidly good read and one very much worthy of your time.

Murder is an Art: A Mystery