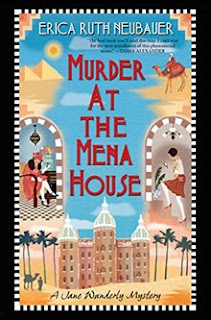 One of the nominees for Left Coast Crime's best debut mystery is Murder at the Mena House by Erica Ruth Neubauer (Kensington, 2020).

Set in 1926, Jane Wunderly is a war widow on a vacation with her aunt, who has paid for a luxurious trip to a Cairo hotel near the pyramids. The Mena House is a playground for wealthy tourists from around the world, giving the common areas of the hotel a cosmopolitan vibe. The discovery of King Tutankhamun’s tomb in 1922 set England mad for Egyptology and thousands thronged to the region to tour the newly opened site.

Far from grieving the loss of her husband, her aunt’s nephew, Jane considers herself set free from an abusive marriage. Her aunt does not know that and is trying to marry her off again. The current social belle of the hotel immediately takes offense at the potential competition that Jane presents, although Jane considers herself unavailable. After a couple of obnoxious encounters, Jane avoids her. Unfortunately. Jane becomes a prime suspect when the aforesaid young lady is found murdered. Jane does not fancy herself in a Cairo jail so she begins what appears will be a sleuthing career. (The second book in the series comes out soon.) Assisting her is an enigmatic and handsome resident of the hotel named Redvers who made her acquaintance soon after her arrival at the hotel.

The setting is wonderful. The time and the place were an exciting time for tourism in the region, about five years after the Amelia Peabody Egyptology series ends. The mystery plot is really good, lots of suspects and false trails. Jane is a fresh spin on the World War I widow and her irascible aunt is intriguing. I am less enthusiastic about the derivative love interest. Why a predictable romance has to be thrown in on the second page of the book is a mystery in itself. While there’s nothing wrong with Redvers, I have seen his ilk dancing through multiple books before him, see for instance Darcy O’Mara in the Royal Spyness series, making almost every move foreseeable. I will say the scene about his name at the end was a surprise.

Also, the editor seemed to be on leave the week the proofs were reviewed: the characters rolled their eyes far too often, sometimes more than once on a single page. It was distracting. Having said all that, it’s still a good mystery and I can see why it was nominated for the Lefty Debut award. Starred review from Library Journal.