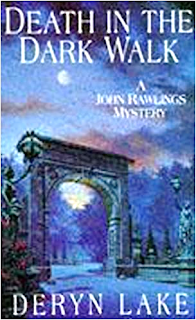 Dinah Lampitt is a contemporary British historical novelist who branched out into mysteries with her John Rawlings historical crime series released under the pseudonym Deryn Lake. She writes a contemporary mystery series set in Sussex that features a newly arrived vicar. The character of Rawlings is based on a real John Rawlings, who became a full-fledged apothecary in 1755, according to Lampitt’s website, https://derynlake.com/rawlings.php.

Rawlings was a contemporary of Sir John Fielding, known as the Blind Beak, who lost his sight at age 19. Fielding with his half-brother Henry Fielding formed the first professional police force, the Bow Street Runners. Upon Henry’s death in 1754 Sir John stepped into his place as Bow Street magistrate and became famous for his progressive ideas on crime reduction and youth employment. Bruce Cook writing as Bruce Alexander made Sir John Fielding the lead in 11 historical detective stories that were published between 1994 and 2005. Other mysteries set during the same period in England are the Robert Fairfax mysteries by Hannah March, the Lord John mysteries by Diana Gabaldon, and the Harriet Westerman books by Imogen Robertson.

The Rawlings series of 16 books was published between 1994 and 2016. The first title Death in the Dark Walk (Hodder & Stoughton, 1994) introduces Rawlings as he completes his apprenticeship as apothecary. He is leaving his house at 2 Nassau Street in London, the address of the real John Rawlings, to meet his friend Samuel Swann to celebrate the end of their apprenticeships. Their destination is Vaux Hall Gardens, which any reader of Regency and Georgian historical fiction knows was a major venue for public entertainment. A large park with walkways, food and drink vendors, and diversions such as fireworks and orchestras. The gardens were packed night after night and much of the amusement was derived from watching everyone else.

On that particular night the two friends notice an exquisite beauty who is catching the eye of everyone in the crowd. Later John stumbles across her body on one of the unlit paths. Because he discovered the victim without witnesses, he immediately fell under suspicion and is taken to Bow Street to meet Sir John Fielding, the Blind Beak. Far from accusing Rawlings, Sir John enlists him to help investigate the case.

I liked the fictional characters created to support the historical ones, especially Rawlings’ adoptive father Sir Gabriel Rawlings, who wears only white and black or silver and black for important occasions. An interesting subplot deals with the Masked Lady, an unknown gentlewoman who appears at the society gambling hells, identity concealed by a mask, and who wins large sums of money from the aristocrats there. In addition, the plot was complicated enough to hold my attention but had none of the egregious anachronisms that so often mar historical mysteries. Top-notch reading.

Sounds fascinating. Are you going to go on and read the rest of the series eventually?