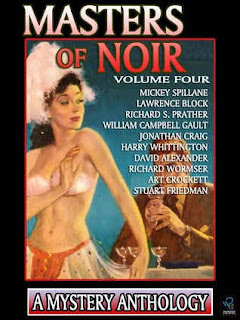 This is the fourth and—to date, at least, as far as I can tell—final e-anthology of stories collected from pulp digests from the 1950s and ’60s: Manhunt, Trapped Detective Story Magazine, and Murder.

Mickey Spillane opens the anthology with “The Pickpocket,” the story of Willie, a reformed criminal whose manual dexterity serves him well after he witnesses a shooting. As I mentioned regarding his story in Volume One in this series, it’s fascinating to read Spillane outside of his Mike Hammer mode, and in the third-person, no less. This story is slightly more hardboiled than that in the first volume, but a far cry from what you get in the novels.

In Volume Two of the series we had a story by Charles Jackson called “I Don’t Fool Around.” Here we have one with the same title by Lawrence Block in which a no-nonsense homicide detective is partnered with a “college cop” he can’t stand, and determined to finally take down professional killer Frank Calder, no matter what it takes.

Prison is a bad place for a convicted cop. Macalay knows that, but also knew after a meeting with Inspector Strane that “[H]e’d had a choice to make—which of two eight balls he’d get behind,” prison or a death sentence. So prison it was, and now he has to watch out for a “Man With a Shiv” as well as worry that he’ll become one himself as he struggles toward a kind of redemption in Richard Wormser’s sometimes brutal novelette. Note: parts of the story allude to prison homosexuality in a politically incorrect manner, which shouldn’t be surprising considering that it was originally published in 1956. But readers who find this sort of thing offensive should stay away, while others should take the era and context into account.

“The Floater” is identified as nineteen-year-old Lucille Taylor, and her death is neither suicidal or accidental; it’s a definite homicide. Detectives Jim Coren and Paul Brader investigate in this novelette by Jonathan Craig, who specialized in police procedurals.

The procedural routines might or might not be accurate—the story was published in 1955, so things may be vastly different today, and in any event I’m not qualified to say either way—but the storytelling has a too-routine, by-the-numbers feel to it, and the result is overlong, plodding, and not at all exciting. Characterization is flat (save for Mrs.  Carpenter’s). A person Brader calls “a cold fish” doesn’t come across that way; he’s just a name on the page. The attempts at light banter between the police partners are forced and lame.

Harry Whittington admirably makes up for this with the next fast-moving story. Celia Carmic’s wealthy and successful husband Curt “had crashed in his private plane on an Everglades hunting trip. After a week of intensive searching, the Coast Guard had abandoned him as dead.” Celia has come to Jim Norton, a farmer and helicopter pilot to ask for his help in searching for Curt, who she can’t believe is dead. She’s willing to pay Norton a thousand dollars plus expenses for his help. In hock to his hairline and in desperate need of money, Norton agrees and the “Swamp Search” begins, as does his growing desire for Celia despite a suspicion that she’s not leveling with him about the situation, a suspicion that increases as days go by and things happen.

The serial killer known as The Butcher has brutally murdered five women. Lester Ferguson, husband of the latest victim, is the only person to have seen the “Face of Evil” and is Homicide Lieutenant Romano’s only hope of finally identifying the psychopath. But Ferguson has been hospitalized following a minor stroke, and is a man with a heart condition in a good, if somewhat predictable, story by David Alexander.

I’m frankly uncertain as to whether “Take Care of Yourself” by William Campbell Gault is just slightly offbeat and ends without the kind of resolution one expects from a detective story, or whether whoever transcribed it into e-book format forgot to finish the job. Private detective Joe Puma is hired by the wealthy Mr. Ladugo to keep a protective eye on his beautiful daughter Angela, who has a penchant for drinking in low-rent bars and for getting involved with lower-life men like Jean Hartley. I’d like to think the story as published herein is complete. In any event, it’s well-written, intriguing, and its open-ended quality doesn’t detract and, methinks, adds a little resonance.

When big, angry Rudy Ferris bursts into Chuck’s hotel room with an automatic in his hand and a burning urge to pull the trigger, Chuck has to feed him “The Fast Line” to try to prevent his brains from ending up on the wall. Rudy’s angry because his girlfriend Ella, restless and desirous of stirring things up in Leadsville, told him what she and Chuck did in her father’s barn. Art Crockett’s story is brief, fast, and furious.

Invited by a friend to a Hawaiian-themed Malibu beach party on a Sunday for lots of  frolicking and rollicking, a private eye doesn’t expect to encounter a particularly grisly “Crime of Passion,” but amidst the potent sips of punch and lava-hot hulas, that’s exactly what he gets. As detective stories go, this one is on the thin side, but it was written by Richard S. Prather and stars Shell Scott, so you can be sure it’s entertaining.

Widower Andrew Barton lives alone in the big main house on his farm, fighting the prurient urges Deena May’s “Lust Song” arouse in him, and which prompt him to frequently spy on her. She’s the fourteen-year-old child bride of Hugh, Barton’s twenty-one-year-old hired hand. The couple live in a smaller house on the property, but Deena May would love to live in the big one, and suggests to Barton a way to make that happen. Stuart Friedman’s story, with its vivid characterizations, gives the anthology a strong finish.

With the reservations noted, I can recommend this collection, as I did with its predecessors, to crime fiction fans who enjoy a more hardboiled approach to the genre.