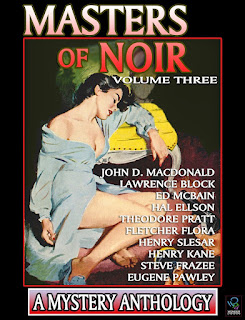 The third of four e-book collections of stories from pulp digests from the 1950s and ’60s, this one—unlike its predecessors—provides a list of where the stories first appeared, thus sparing me speculations. With the exception of the Block/Lord story, which ran in Man’s Magazine, all were published in Manhunt. They are as follows:--

When her regular cleaning woman doesn’t show up, Mrs. Belding calls the employment agency and they send over Hattie. Mrs. Belding is apprehensive at first about having a “Stranger in the House,” but Hattie proves both zealous and efficient when it comes to getting the work done. But this is a suspense story by Theodore Pratt from a crime fiction periodical, so you know something sinister is going to happen.

“May I Come In?” by Fletcher Flora is a tale of madness and the desire for revenge, as the nameless narrator recounts the death of his beloved Freda at the hands of a pathological mass murderer named Marilla, whose trial he attends with an almost religious fervor, feeling “the yellow hate like pus inside me.” This one is intense.

The skin-diving club is known as The Deep Six, although the membership has grown considerably since it was first formed. But its atmosphere changes subtly but noticeably when John Lash joins the group, and especially when he makes a pass at Croy Danton’s lovely wife Betty. As a result, the term “The Killers” takes on multiple meanings in a taut, insightful novelette by storyteller supreme John D. MacDonald.

Old pro Phil Pennick and young Davy Wyatt have scored more heavily in the robbery than they ever expected to, but they have to hole up because a witness saw them shoot the bank messenger—a witness who swears she can identify them. Phil becomes a “Cop for a Day” to prevent that, with an unexpected surprise in a story by the exceptional Henry Slesar.

Besides writing under his own name, Evan Hunter used several pseudonyms. In the byline for “Attack” he’s billed as “Ed McBain writing as Hunt Collins.” (Decades ago I read Tomorrow and Tomorrow, a science fiction novel he wrote as Collins.) In the fast and very violent but otherwise rather simplistic story under consideration, the nameless first-person narrator pursues the man who has just murdered someone special to him.

“Six Fingers” is the nickname his companions have given the awkward teenager. His friend Joey points out a particular blonde named Cissie and asks if he likes her, and though Six Fingers admits she’s pretty, he says he doesn’t like girls. When he subsequently encounters Cissie one-to-one, his anxieties manifest themselves in ways that lead to several kinds of conflict. A solid story by Hal Ellson, who specialized in stories about juveniles.

Lawrence Block writing as Sheldon Lord tells of another unnamed first-person narrator, a voyeur who takes special care to avoid being caught, who’s not a pervert or sex fiend, as the police maintained once when they caught him, but who is “Just Window Shopping.” He’s not prepared for what happens when a beautiful woman he’s watching catches him doing so.

Private eye Peter Chambers is in a cemetery at one a.m., contemplating the concept of the “Precise Moment” he previously discussed with the lovely ballerina Trina Greco, while waiting for an unknown party to collect a package Chambers is there to deliver on behalf of his wealthy client, Florence Fleetwood Reed. What seems like a simple errand almost turns fatal for Chambers, thrusting him into a much bigger and more complicated case than this initially seemed, and resulting in another precise moment, this one of revelation. Except for author Henry Kane’s annoyingly cutesy habit of having Chambers refer to himself as a “private richard,” this is a fast-paced, entertaining novelette.

A story about a police radio dispatcher sounds pretty dull, doesn’t it? Steve Frazee disproves that with “Graveyard Shift” in which Joe Crestone is dictated to at gunpoint by attractive model Judith Barrows about how and what assignments he directs to patrol cars. How can he prevent the crime she’s aiding and abetting?

Ron Jordan is a young traffic cop who’s been on the job for a little over a year. Having somehow developed a reputation as a ladies’ man, he’s summoned to the inspectors’ bureau where a Captain and Homicide Chief-Inspector recruit him as “Bait for the Red-Head” in the investigation of a beat cop’s murder. Eugene Pawley’s novelette could have been a tad shorter, I thought, but overall it’s not a bad story.

I neglected to point out in my reviews of its predecessors that this series, this entry included,  contains more than a few, but not a plethora of, typos that are all too common nowadays both in e-books and physical editions. None of those I encountered, fortunately, are severe enough to confuse or distract readers from the generally captivating magic good storytelling engenders. So all—with one remaining—are recommended.