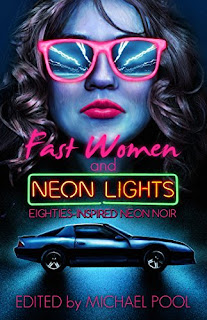 Eighteen complex short stories make up the anthology Fast Women and Neon Lights. As made clear by the subtitle, Eighties-Inspired Neon Noir the tales in this book are noir in style and heavily steeped in the glitz and glamour of the 80s. The music, the hair, the clothes all play their atmospheric role in these short stories where things often take a very dark turn under the neon lights.

After a short introduction by publisher and Editor Michael Pool and a forward by Will Viharo, the read starts with “Valley Girl” by Kat Richardson. Detective Willet has a serious problem and she sits across from him in interrogation. Kimberly Peterson knows what she did and yet, at the same time, does not really seem to grasp what she did. The social worker isn’t really helping either. Detective Willet would like to give them both an attitude adjustment. As made clear in the first sentence, the fact that “the Interrogation room smells of Pine-Sol, Love’s Baby Soft, and vomit” does not help either.

Hot and humid in Orlando, but at least the car ac in the Chevy Celebrity is working in “Alone Now” by Patrick Cooper. The alarm is supposed to be off according to cousin Harv, so Trip and Nash should have no problem stealing what they came for.

If Gary could stay sober for a bit, their big payday might just happen in “Big Shots” by S. W. Lauden. Murphy, the moneyman, is in New York and counting on Gary to do a good job with the band down from Seattle for the big show in Los Angeles. Some major labels are going to be at the show and, as group managers, Gary and Murphy stand to make some serious bank.

Connie Jackson is working hard in the yard as “The Deep End” by Dietrich Kalteis begins. Emmett Granger, a senior investigator with NorthWest Lifeco, just caught her lying about her claim though she doesn’t know it yet. What he is going to do about that is just one small piece of the tale.

Wrestling is the game in “Parts Unknown” by Sam Wiebe. A chance to wrestle in the holy mecca known as “The Garden” in NYC is too good to pass up. Sure, he has to get thrown by the wrestler known to all as the Giant as he loses the match, but it will be worth it. Hett also gets the chance to reconnect with some folks and make friends with others. 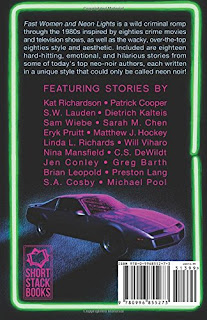 The show sold out in Los Angeles and because Tiffany didn’t think to buy them when she had the chance, now Pia and Tiffany can’t go. Unless Pia can work a deal and trade some coke for the tickets. First Pia has to score the coke in “Besties and Blow” by Sarah M. Chen. That and not kill her ex and his new girlfriend. Sure, they ought to die, but they have the tickets so she needs them for when she gets the coke.

Lake Castor Police recovered the body of Jessi Spangler on a dark and grey morning in September 1985. What happened to her and why she is dead is a big part of “It’s Morning Again In Lake Castor” by Eryk Pruitt.

Tokyo is the location for “Widowman” by Matthew J. Hockey. Aki is ready to take out Junko, but she wants some answers first. Secret and lies have to be uncovered before she can go home to her 24rth floor apartment.

Ryan thinks they should go to Calgary in “The Envelope” by Linda L. Richards. Bonnie is not at all thrilled with the idea. Ten long years after high school the envelope has the potential to change their lives in so many ways unthinkable before.

Crockett and Tubbs are hard at work in “Meantime” by Will Viharo. It is a typical Miami night as they conduct surveillance on the art deco style mansion down the street. The subject of the surveillance, Enrique Salazer, picked up where the recently and very violently deceased, Tony Montana, left off.

Suzanne wants to be the next female superstar on the pro wrestling circuit. In “Big Hair, Banana Clips, And The Figure-Four Leg lock” by Nina Mansfield, Suzanne has a plan. Part of that plan is to attend a job interview over at the local roller rink. Good thing Laura is around to talk about reality.

People only pay when you make them. Like sin, payment comes in many forms. Timmy has a very specific payment in mind “Dutch” by C.S. DeWildt. He knows going in that the payment is going to be expensive. Whether the plan will solve the issue is the real question.

Andie tries her best to keep up in “In The Swimming Pool” by Jen Conley. Being in the pool at Jimmy’s and trying to throw the ball just as hard as the guys isn’t working out for her. At least Alan didn’t go after her and try to humiliate her.

Pardo and Bobby are watching television when the press conference with Britney Jackson and  Sheriff Brad Daniels begins. She somehow survived being shot in the head during an armed robbery. For Pardo and Bobby the story by Greg Barth is all about “Getting Seconds.” This also is the winner hands down for the most seriously disturbing tale in the book. The last few paragraphs blow away the competition.

Roberto Razetta’s appliance-shop in Korea town is less than five miles away from Hollywood but is a world away in reality. It is hanging on thanks to a secret side income Roberto makes in the course of his video repair work. In “Caught on Video” by Brian Leopold, Roberto’s latest client this spring morning seems to be typical in his urgency to get his Sony product fixed.

The plan was to get in and out of the Gryphon Sportsbook as quickly and quietly as possible. She needs to place the $8500 bet on Buffalo to win and leave. That is all. It won’t be that simple in “Fleckman’s Fix” by Preston Lang.

“Last Dance at the Glimmer Lounge” by S. A. Cosby involves the DJ Chaz, drugs, and his special girl, Lydia. Of course, a plan for getting out is involved. That is not going to be easy since there is a connection to the Philly Mob.

Bringing up the end of the anthology is the tale from the editor, “Night Thief.” A stolen 81 Camaro, a dead hooker in the trunk, and the overriding need to stay alive and get the job done are just some of the elements at work in this one.

The eighteen stories that make up Fast Women and Neon Lights: Eighties-Inspired Neon Noir are all solidly good ones. Often twistedly funny, the tales here pay homage to the bright colors and big hair decade in a variety of ways. Drugs are often present, plans are sure to go wrong as one would expect with noir style tales, and your lover may not have your best intentions at heart as greed always rules.

Digital ARC supplied by the editor Michael Pool to read and review if I so desired with no expectation that I would do either.