Sample Sunday: Excerpt from My Grave is Deep: A Noah Green Mystery by E. E. Williams 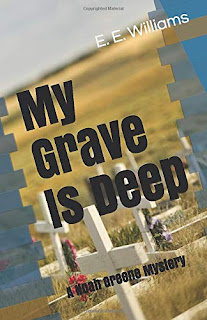 Please welcome back E. E. Williams with an excerpt from his latest novel, My Grave is Deep: A Noah Green Mystery. This third book in the series is available in print and eBook formats at Amazon.

Sometimes, those who are lost want to remain that way and will do anything to stay invisible. Sometimes, they’re held captive by circumstances beyond their control. Sometimes, though, they just vanish like mist in the morning sun.

I was there once. Missing. Ran away from all that was dear to me. Disappeared.

Now, my job, if you want to call it that, is to reunite the missing with those left behind, the ones who wait and wonder and grieve.

The favors I do for others have brought peace to some, pain to others. Regardless of the outcome, they have come with a terrible, heavy cost, a cost I thought I was no longer willing to bear.

Yet here I am at the bottom of a yawning pit of ragged, razor-edged stone, trapped with a primordial presence that has wrapped me in a deadly embrace. This is my grave, dug in a cemetery of rusting steel, worn rubber and crushed plastic, out on the edge of the Everglades, under a dome of ink-black sky.

There is only one escape, only one way out – up – but the opening is small and well beyond my reach.

Time is running out. Soon, this thing that men have feared since the dawn of time will feast on my flesh and bones.

My friend, Charlie Hall, told me once that I couldn’t save them all – the ones I loved, those I’d sworn to help, the missing. You can only save yourself, he said.

He was wrong. I can’t even do that. The beast flexes and a fuse of pain ignites up my spine. I’m going to die here, in a fetid hole.

Fear swims through my brain. Fear and regret.

As the gator clamped its powerful jaws around Jeffrey Flaum’s neck, crushing his C2 vertebra and thrusting splinters of bone into his brain stem, he had a final fleeting thought in that nanosecond between life and death: I deserve this.

Had he a choice, he would have preferred a less horrific end. One on the battlefield, perhaps, where he might have redeemed his tattered reputation. Or in his own bed, where peace could find him at last. 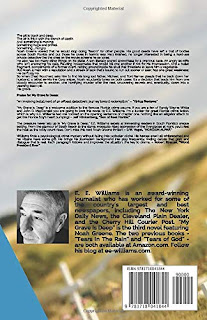 But the decision on where and how he would breathe his last wasn’t his to make. It belonged instead to a man who had chosen Jeffrey Flaum as the first of the six to die. And in that last instant, when the gator mercifully ended his guilt and pain, Jeffrey Flaum knew it was fitting.

Just a few hours earlier, his ample rump had been planted against the wooden fence that separated his home’s ample property from the less-than-ample, par-three 12th green of the exclusive South Miami Country Club. A thread of smoke from the cigar he held in his stubby fingers coiled upward and dissipated into the darkness. He enjoyed a good cigar – and this was a very good one, indeed, a hand-rolled La Gloria Cubana from the Little Havana El Credito Cigar Factory. The smell of it was intoxicating, nearly sexual, in fact, and it infuriated him that every time he tried lighting up inside the lavish house he shared with his wife and their two dogs, he was banished outdoors. His filthy habit, she said, “stinks up the place.”

Stinks up the place? Filthy habit? He was a cigar smoker before he met her and never hid it while they dated. Back then, he smoked in the house, the car, even the few restaurants that still allowed such God-given American freedoms, for which he fought and risked his life. She knew who he was and what his “filthy” habits were.

So why, once they were married, had she decreed that lit cigars in the house were off limits? Was it because that after hooking him and landing him she no longer had to pretend that the smoke and whatever other filthy habits – plural, apparently – he had didn’t bother her?

The cigar tip glowed bright as a ruby in the blackness. He took a deep draw and blew the smoke out slowly through his pursed lips. Yes, a fine cigar.

The evening was hot and cloying, and a line of sweat snaked down the back of his neck, staining the collar line of his $150 Nat Nast shirt. If a La Gloria Cubana now and then was the worst of his filthy habits, his wife was a lucky woman. He didn’t cat around, didn’t play poker with the guys every Thursday night, didn’t go to the track and gamble away their savings. He did go to church every Sunday morning and faithfully, if stoically, attended all the family outings with minimal protest; even the ones hosted by his wife’s sister, the one with the slob of a husband and all the screaming kids.

Jeffrey Flaum knew he wasn’t the sexiest man on the planet. Since leaving the Marines, he had developed a potbelly from too much beer and too little exercise. His hairline was in full retreat and he had the flatiron face – what was that old joke? – yeah, the flatiron face of a guy who kissed an 18-wheeler in Boston and hung on ‘til Denver.

But he compensated his wife in other ways. With cash. Lots and lots of cash. Cash that bought cars, and jewelry, and clothes, and two frou-frou pedigree poodles – Romulus and Remus – that stubbornly refused to be housebroken (talk about your filthy habits), and three humongous homes, one in Aspen, another in Hawaii, and, of course, here, where homes went for … well, a fucking lot.

Aspen and Hawaii? Neither of them skied and they got to Hawaii maybe once every two or three years, the trip being such a long slog – thirteen hours – from Miami. So, most of the time, the homes sat empty, burning cash to keep the lights on, the water running, and the grounds groomed.

There wasn’t much he could do about his face, but the money … as long as that kept flowing why couldn’t he smoke a good cigar in his own home whenever he damn well felt like it?

Filthy habits, he thought. Haven’t I paid for the privilege to have a filthy habit, even if that’s what it was, which it wasn’t? Wasn’t that what I was doing in Afghanistan? Defending the nation? Didn’t that earn me some stinking rights?

Don’t go there, he quickly warned himself. Don’t.

But it was too late, and the memories of his time in-country flooded through the leaky dam he’d tried to erect to keep them in check. It was like that now. A stray word here, an unguarded thought there, and it all came rushing back.

It had ended badly, his time in the Marines. He wasn’t one for introspection, but he knew he wasn’t an exemplary leader. Knew that his unit believed that nobody would ever confuse him with George Patton. Knew that behind his back they called him Major Creep.

But, he told himself, he’d at least been effective … right up until he gave the orders that would forever change the lives of those he commanded. He’d had the opportunity to maybe make it right, if that were possible, which he knew deep down that it wasn’t, but in the end, his foolish pride had only made things worse.

You will all die screaming.

The words leapt into his mind unbidden and unwelcome, tunneling deep into his brain like an earworm.

You will all die screaming.

It had been, what, three years since he’d heard the threat spoken out loud, and though he didn’t believe it then, it still had the power to quicken his breathing, and turn his hands clammy.

Jesus, he wished he could just erase that entire period of his life, forget all the responsibility and the pressure and especially what had happened that blistering night out in the desert. But he knew that wasn’t possible and forgiveness was a ghost that would haunt him until his last days on earth.

What he didn’t know, what he couldn’t at that moment fathom, was that his last days on earth were about to come sooner than he expected.