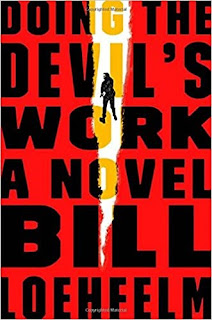 I learned about Bill Loehfelm through a tweet from Alafair Burke. Loehfelm is a talented guy, writing novels and playing drums in a rock band. He wrote two stand-alone crime novels and then created Maureen Coughlin, a cocktail waitress on Staten Island. Coughlin moved to New Orleans about the same time as Bill Loehfelm did, where she joined the New Orleans police force. Her adventures are documented so far in five books.

The third one is Doing the Devil’s Work (Sarah Crichton Books, 2015), which received starred reviews from Booklist, Kirkus, and Publishers Weekly. Coughlin has completed her officer training and is on the patrol rotation schedule. Out alone at night, she is sent to investigate the report of a dead body in a gang-ridden black neighborhood. The victim she finds is all wrong for the location: a young white man with a slashed throat. A few days later another corpse with a similar injury turns up.

Coughlin by rights has no place in a homicide investigation beyond reporting the discovery and securing the scene, but she itches to help with the two related killings. Research on the victims’ backgrounds shows links to a domestic terrorism group which opens the door to Federal involvement. In addition the gang leader who eluded capture in her previous case has turned up, and she is determined to bring him in this time.

Coughlin is still trying to find her place within the force, an outsider due to her inexperience, her gender, and her newness to New Orleans. The pair of officers she most often deals with encourage her to go along to get along but she’s uneasy about some of the corners they cut. With the police force under scrutiny for corruption, she is not eager to be found not following proper procedure. But reporting her team mates is frowned upon too. She finds herself in an ethical quandary and in an exquisitely written few pages she verbally tap dances through awkward conversations laden with landmines with the pair and with her training officer, trying not to incriminate herself in anyway or to compromise her own personal ethics.

Loehfelm is a staggeringly gifted writer. I found myself pausing to admire a sentence, a word choice, an image. Coughlin is complicated but credible, as are the rest of the characters. I especially liked her training officer. I will be looking up the rest of the books in the series. Highly recommended.