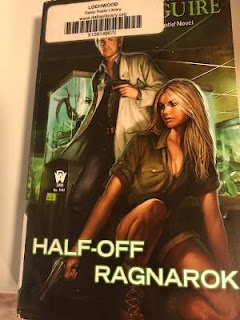 Half-Off Ragnarok is the third book in the book three in the InCryptid Series of novels by Seanan McGuire. This series revolves around the Price Family who are a group of American Game Wardens who specialize in mythological creatures. They keep the monsters safe from the humans while keeping the humans safe from the monsters. They do this while trying to keep themselves secret and keep most people from finding out that there are things like monsters among us.

Every few novels, the main character in the family that is focused on changes.  In this novel Alexander Price is the lead character. He is currently working undercover in Ohio at the Columbus Zoo running the Herpetology Department.  Things are going well so far. He is studying the local cryptological wildlife and raising basilisks in the bottom of the zoo. He is keeping peace with the local gorgon community while most of his fellow humans have no idea anything weird is going on. Everything was fine until the murder.

Someone was murdered in the zoo. Unfortunately, the problem is that the victim was partially turned to stone. Not only are the cops involved over the murder, the fact that the victim was partially turned to stone means there is extra interest. It is up to Alex to figure out who did this and why before people start asking uncomfortable questions that would make keeping the Cryptids secret difficult. Not only does he need to do that, he plans on keeping Crow, a mini griffin with serious attitude, as a pet and that means he has to figure out how to quietly do that. 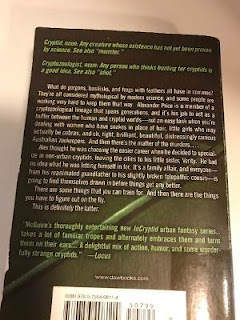 Part mystery, part family history, part urban fantasy, with a dash of humor and science, this action filled series is quite unique. Each of the books in the series are pretty much stand-alone novels that tie into a larger universe. One does not need to read them in order to understand the series. This is just a fun series where the main characters to try to find a balance between the local cryptological community, some of which are sentiment and others are not, and their fellow humans.

If the idea of game wardens who deal with mythological creatures intrigues you, then this might be the series for you.  The first book in the series is called Discount Armageddon. That first book stars Verity, Alex’s sister, who lives and works in New York and deals with the cryptological community there. The fourth book in the series is called Pocket Apocalypse which I will be requesting my local library to buy since they have the rest of the series. There are numerous books and a series of spinoff’s set in this universe and there are also numerous short stories. All of her short stories are free to download on author’s website as free reads so that potential readers can get a feel of what the series is like and about.

My copy came from the Lochwood Branch of the Dallas Public Library System.