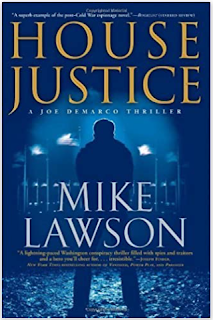 Mike Lawson spent most of his career working on nuclear submarines and ships for the U.S. Navy in the Pacific Northwest. When he retired, he decided to write about what he knew, which was the U.S. Government. He created Joe DeMarco, a lawyer and trouble-shooter for the Speaker of the House, as Counsel Pro Tem for Liaison Affairs, based in Washington, DC. DeMarco has appeared in 15 political thrillers since 2005. Five different titles in the series have been shortlisted for the Barry Award and a sixth for the Edgar.

In the fifth book about the political fixer, House Justice (Grove/Atlantic Press, 2010), DeMarco’s at the top of his game, looking for the person who leaked a story that caused the savage death of a valuable spy in Tehran. The journalist who scooped the story refuses to cite her source and she’s imprisoned for contempt of court. From her jail cell, where she’s planning the book based on her experience and the subsequent television appearances, she appeals to DeMarco’s hard-drinking boss Speaker of the House John Mahoney. Either he gets her out of jail or she blows the whistle on their affair of 20 years before. The CIA is also hot on the trail of the informant, as well as someone else who keeps tagging behind DeMarco, waiting for him to find the spiller of the beans.

A fast-moving story that does not lag despite its length. Significant insider detail gives the story a ripped from the headlines of the Washington Post feel. The conflict between the two agency directors protecting their respective territories is most realistic. A slick kidnapping performed by Russian thugs and an even better escape from a moving car on a mountain road. The characters are terrific. Mahoney is an underhanded and womanizing politician who slips out of his office on Capitol Hill to watch the nearby elementary school baseball games and serve as umpire when one is needed. DeMarco tends to stand back and watch the circus antics of those around him while he focuses on the job and ties up loose ends.

Most fans of political thrillers have already discovered Lawson so I am recommending this title for anyone in need of some good contemporary escapism.