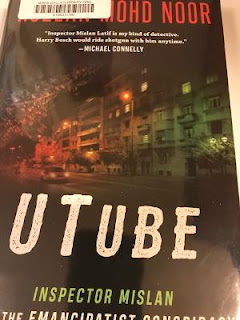 UTube: Inspector Mislan and the Emancipatist Conspiracy by Rozlan Mohd Noor is the third read in the police procedural series based in Kuala Lumpur, Malaysia. Inspector Mislan and Detective Sergeant Johan are brought into an ongoing case when a friend of a sexual assault victim dies.

That is the second attack in a case that starts when Era Amilia was sexually assaulted. The attack was video recorded and shared on the internet via UTUBE. Hours later, she died after a fall the balcony of her ninth-floor apartment at the condo tower. Was she pushed or did she jump?  While The sexual child abuse investigation division intended to handle that case by themselves as it was tied into the rape case, when a second rape attack results in an obvious murder of a friend of the victim, Special Investigations is brought in and that means Inspector Mislan and Detective Sergeant Johan.

That means the independent take charge MIslan is forced to work with Inspector Sherry and her squad. Not only does he have to work with her, the powers that be have decreed he has to take orders from her. Mislan’s reputation is known to all and with the intense media focus and political factors, he is not going to be in charge. Inspector Sherry She is very much by the book and Mislan isn’t. She also is not going to jeopardize her career by letting Mislan have his usual free reign.

With pressure mounting and additional attacks and recordings being posted online, the chase is on to stop at least two, if not more, rapists who believe they are correcting wayward behavior. Things are very complicated and the case has many angles to pursue as the officers involved try to find a way to work together.

As always in this series, things are very complicated. UTube: Inspector Mislan and the Emancipatist Conspiracy is one of those books there is hard to explain in greater detail without ruining the read. Suffice it to say, these police procedurals are complicated and solidly good reads with interesting cases and plenty of detail on sights and sounds that the reader feels like they are there working the case and eating the food. As in earlier books, there is a lot of mention of food so be prepared.

My copy came via the Martin Luther King JR Branch of the Dallas Public Library System.